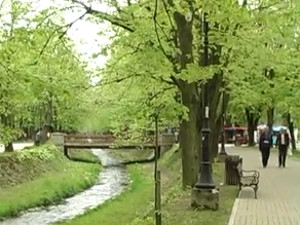 Vrnjacka Banja (Photo: YouTube/screenshot)
Zepter intends to invest another EUR 10 million in the Zvezda 1 hotel in Vrnjacka Banja, for which it paid EUR 1.4 million, renovate it and raise its category.

Mayor of Vrnjacka Banja Boban Djurovic said that they were pleased that Zepter had bought Zvezda, as they had received a letter containing guarantees and the planned amount to be invested in the hotels from the company before the sale. According to Djurovic, the plan is to fully close down Zvezda before the end of the summer season, in late Spetember 2017, and to renovate it by the spring of 2018.

– We are glad that we have managed to find a mutual interest. The tourist season will be active in Vrnjacka Banka this year as well, meaning congress tourism, seminars and sports events for workers, leading to tens of thousands a overnight stays a year, as the reconstruction of Zvezda will be carried out parallel to this – Djurovic pointed out and noted that the congress hall in Zvezda 1 is one of the biggest such halls in Serbia and that it had a capacity of 1,200.

The Zvezda 1 hotel, the most valuable piece of property of HTP Fontana in bankruptcy, located on the Vrnjacka Banja Promenade, was bought by Centrotextil, owned by businessman Philip Zepter.

Aside from Zvezda, the Svajcarija café was sold, also located on the Vrnjacka Banja Promenade, across the street from Zvezda. The facility was bought by the Kraljevo-based company Aciko-komerc for around EUR 910,000.

– We are pleased to be able to animate the biggest and strongest investors in Serbia. We expect the reconstruction of the sold facilities to start these days in order to raise the category to 4 and 5 stars as soon as next year – said Djurovic.

The sale of the 10,000-m2 Zvezda 2 hotel, where only rough construction works were performed and whose construction stopped in the early 1990s, is also being prepared, and there are indications that Philip Zepter’s company is interested in purchasing this facility and the Fontana hotel as well.