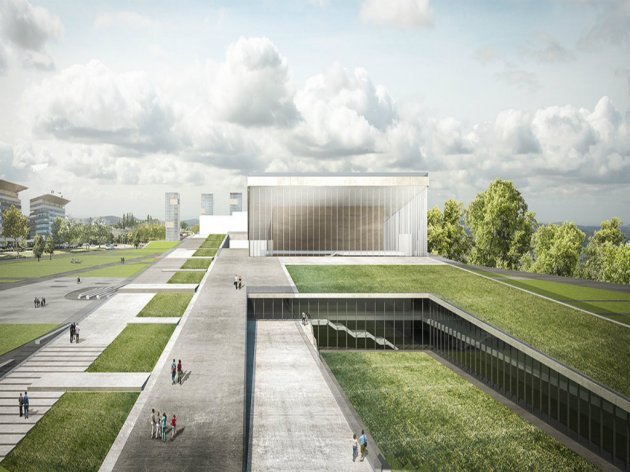 Marcetic and Maksimovic's first-prize conceptual design (Photo: beoland.com)
The construction of the new Belgrade Philharmonic with a roof parking lot is planned on the 47.2 ha area between the Usce Business Center and the Palace of Serbia. The complex should also feature a section with exclusive stores, restaurants and coffee shops, as well as a mini-square and a bicycle track.

This is the idea of Dragan Marcetic and Milan Maksimovic, the architects whose project won at the contest for the design of a part of Block 13 in New Belgrade carried out by the Belgrade Land Development Public Agency in cooperation with the Union of Architects of Serbia.

The competition also served to test the location's spatial and functional capacities, as well as to consider the possibility of the realization of a new Belgrade Philharmonic building. The selected solution will provide a foundation for the preparation of the urban planning documentation. Milutin Folic, city architect and the president of the jury, stated for Politika that the adoption of the documentation was planned to happen in late 2017, and that the complex was to be designed in 2018.

The new, 27,000 m2 building of the Belgrade Philharmonic will be accessed from Mihajla Pupina Blvd. A fountain, an open stage and green areas will be located in front. The new philharmonic will in fact be raised on the foundations of the never built Museum of the Revolution. The audience will access the first floor by stairs, where an entry hall and a lobby of the grand concert hall with 1,500 seats and a 500 m2 classical music stage are envisioned. The premises, as envisioned, will have twice the capacity of the Kolarac hall, where the Belgrade Philharmonic is performing at the moment (its seat in Studentski trg Street is non-conditional).

The back end of the grand concert hall should contain official premises – rooms for performers, a wardrobe, a room for conductors, practice halls, instrument halls, a sound and video studio, lounges, technical rooms, administration etc. They will be accessible from the side, from the direction of Nikola Tesla Blvd, where the official entrance and the technical access are envisioned.

The top of the facility will contain a “park”, i.e. a green roof with an overlook.

In addition to the philharmonic, accompanying commercial features (exclusive stores) are planned, to be accessed from Usce Street and the access plaza of the main entrance. Commercial features will also consist of coffee shops and restaurants (as part of the gallery section).

As planned, the commercial mall (which will remain operational outside the concert season as well) will have an area of around 19,000 m2. 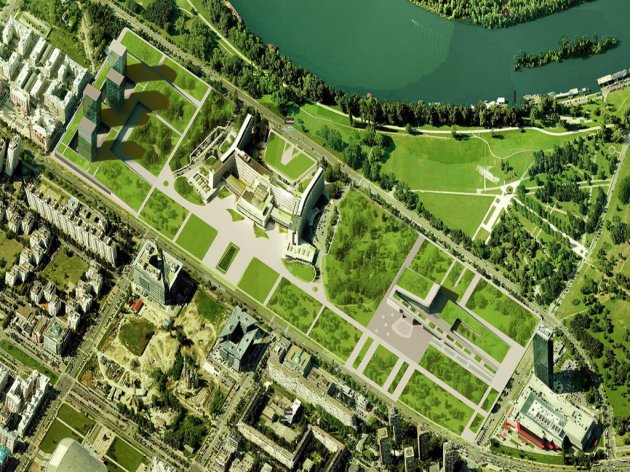 The main characteristic of this conceptual design, in addition to bringing together cultural and commercial features, are large green areas.

The north side of the complex should feature a green oasis, which will spread throughout all levels. The south side will actively connect the floor segments of the mall and the entrance access to the philharmonic and enable reaching the top of the building, which will provide a view to Kalemegdan, the river and the old part of Belgrade, as well as the Palace of Serbia, New Belgrade and Zemun. Extensions, the so-called “bleachers”, are envisioned on the topmost positions of the slanted platforms.

The bicycle tracks in the block will be connected to the existing network of tracks and a transverse connection between Mihajla Pupina Blvd and Nikole Tesle Blvd will be established.

– The conceptual design for the most part keeps the current green fund in Block 13, and also enhances it. The slightly tilted roof surface, “the slanted park”, will provide recreation content for all generations: children – who can have fun in specially planned open play areas, exercisers – who can use the slanted roof as a special kind of a trim track or a bicycle track or an open exercise area, as well as the young – who can gather here at night and enjoy the view – say the authors of the project.

Architects Dragan Marcetic and Milan Maksimovic expect the new development to draw a large number of visitors to the area.

The plan is to use natural stone for the facade and the exterior area, natural wood for inner paneling, transparent glass surfaces and glass rails both in the exterior and the interior.

The complex will contain a parking lot with around 4,000 spaces.

The winning solution of Marcetic and Maksimovic also envisions the construction of four skyscrapers with 24 floors each between the Palace of Serbia and YU Business Center, as confirmed by Dragan Marcetic for Politika. These are meant to be office buildings (220,000 m2) with two underground parking levels (74,000 m2), the construction of which should cost around EUR 110 million. There is no room for the current gas station in that section. Marcetic says that the construction of the philharmonic with the commercial features and the parking lot will require at least EUR 30 million.