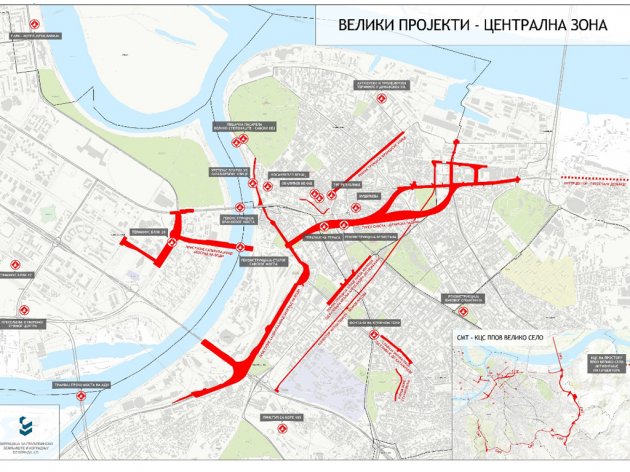 (Photo: beoland.rs)
The famous meeting spots in Belgrade – Slavija and Vukov Spomenik, will soon get a new look. Although people of Belgrade might be interested in these locations the most, they are only a small part of the city projects planned for the period to come.

What can people of Belgrade expect and when?

The Agency's projects are sorted in sections and eKapija presents them to you as such. 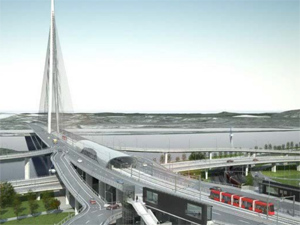 Trams will go across the Ada Bridge (Photo: beoland.rs)

The future tunnel, which will connect the Sava amphitheater and the Danube coastal area, will start being defined in spring 2017. Two conceptual solutions (with elements of a preliminary plan), whose preparation began in early October, will be reveled by then. The job has been awarded to CeS COWI Belgrade, along with joint bidders Geo-dita Belgrade and Makspro Belgrade. The Agency aims to have the works start in spring 2018, and for the tunnel to be completed in 2021. The project is worth EUR 110 million (VAT not included).

This section entails the bridge on the Danube from Ada Huja to Pancevo Road, the development of Patrijarha Pavla Street (the plan for which has been prepared), the development of Borska Street (aiming to, among other things, solve the issue of traffic congestion around the Stepa Stepanovic neighborhood) and Pere Velimirovica Street, as well as the outer tangent from the highway to Kralja Aleksandra Blvd. 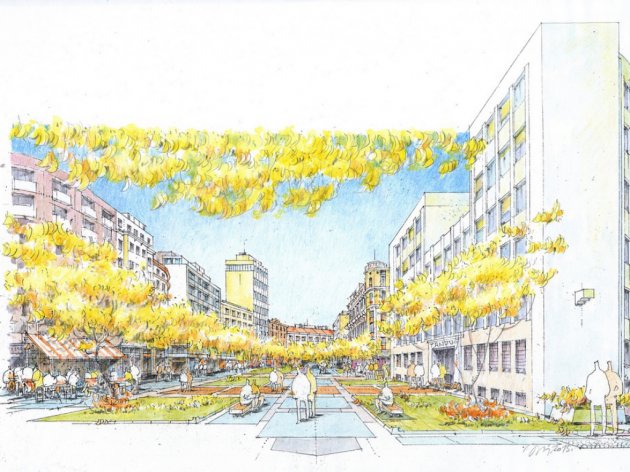 As well, there's the plan of turning the Republic Square into a pedestrian zone, excluding public transport vehicles and bicycles, along with the expansion of Makedonska Street and Kolarceva Street. The contest for the studio to prepare the technical documentation has just ended (the submission deadline was November 2), and the winner should be revealed by the end of the month.

The “Identity-Mobility-Ecology” project also includes the development of the Terazije Terrace and Nusiceva Street.

The construction of the long awaited fountain on the Slavija Square has been awarded to PMC Inzenjering (following a complaint and a temporary suspension of the tender), and City Manager Goran Vesic announced that the works might start this month. 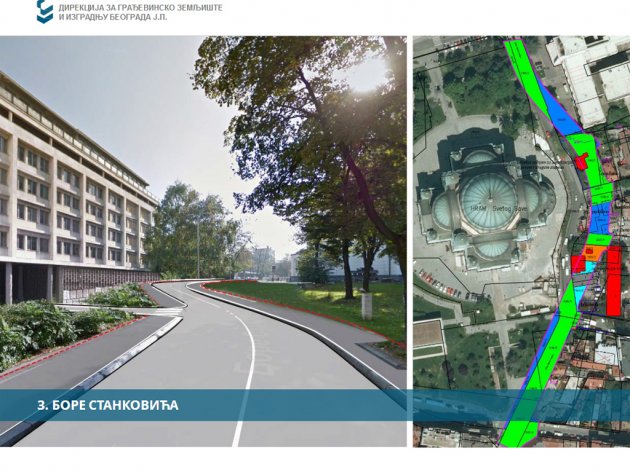 “Parks and squares” – Construction workers at Vukov Spomenik in summer 2017

The area around Vukov Spomenik should be integrated with the existing park, with trees and green areas preserved and flower boxes and the remaining area enriched with additional greenery. A public call for the preparation of technical documentation is in progress, and the opening of bids has been scheduled for November 30, 2016. Provided that all stages are completed within the deadline, the works should start in July 2017.

The future look of the park at New Belgrade's Jugoslavija hotel will be revealed next year, and the tender for the preparation of technical documentation is in progress. The agreement with planners will be signed this December. 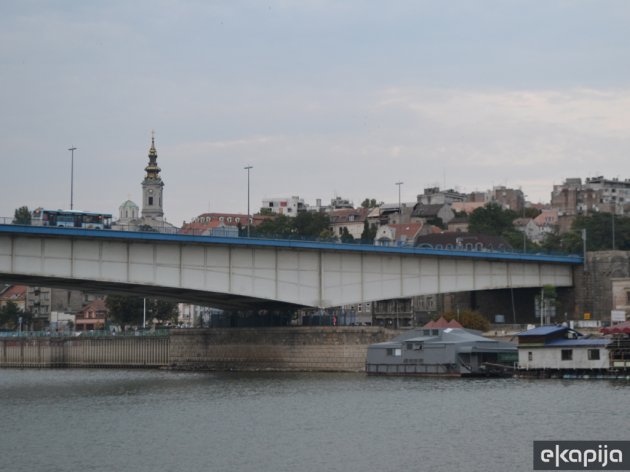 The Agency's plans also include block 42, i.e. the bus station and terminals. According to Mayor Sinisa Mali, the construction is expected to start this spring.

Among the planned projects is the development of the access route to the Prokop station, as well as the construction of the Dunavska Street bus terminal, which will enable trolleys to be moved from the Studentski Trg Street.

The completion of the project of collectors and interceptors (the construction of remaining sections) is planned, as well as the construction of a drainage station in the area of Veliko Selo and another collector (Emergency Service – Venizelosova Street).

Only logged-in users can comment.
Latest
Most read
Digital Marketing Gets New Tool – Local Platform for Business Analysis of Data from Social Networks and E-commerce Platforms to Arrive 14.08.2020.
Aeroflot Cancels All Flights to Tivat in 2020 13.08.2020.
This is What Banjaluka Congress-Concert Hall will Look Like – Preliminary Design Selected 14.08.2020.
Srbija Voz to Get New Information System for Company Resource Management and Modernize Sales Network 14.08.2020.
Al Dahra to Invest EUR 173 Million in Most Modern Agricultural Complex in This Part of Europe – By the End of 2022, Palilula to Feature Animal Feed Factory, Silos, Biogas Power Plants, New Irrigation Systems... 09.08.2020.
Wholesalers and Commercialists Get Reliable Software That Saves Time and Automates Sale Process 12.08.2020.
NALED Proposes Free Registration of Property for Two Years 14.08.2020.
Serbian startups once more on Startup Genome world startup map – Belgrade and Novi Sad startup ecosystem worth around USD 502 million 28.06.2020.
Weather
Weather forecast