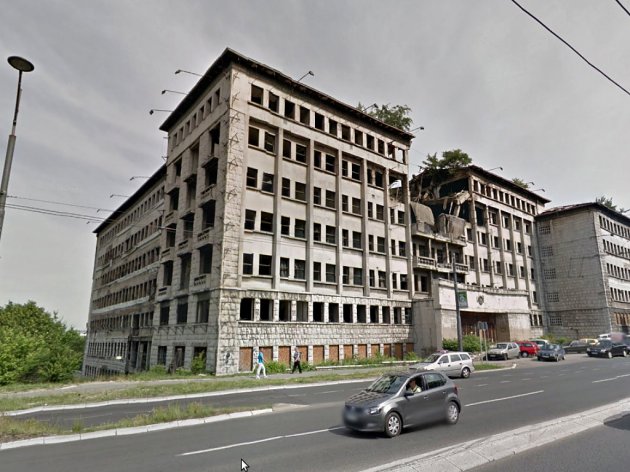 (Photo: Google Maps/screenshot)
The mayor of Belgrade, Sinisa Mali, took a tour of the building of the former Federal Ministry of Interior on Monday, October 24, which is currently being demolished in order to prepare the terrain for the construction of a residential and office complex. He was accompanied by Israeli investor Gili Dekel, the director general of the Airport City, Adir El-Al, and the city architect, Milutin Folic.

– The investment is worth more than EUR 200 million, and the area in question is 60,000 square meters. Our construction industry will be employed here, which is a great thing for Belgrade and Serbia and fully fits into our strategy and vision of developing a new Belgrade – Mali emphasized.

He added that, through the investment, the part of Belgrade in question was getting an entirely new look.

– By the end of next year, we will finish the project of reconstruction of Kneza Milosa Street, where we're planning to move the cars from the street to an underground level, a garage, in order for the street to be available to pedestrians above all. We are waiting for the decision by the investors which have bought the former American embassy building and this will be turned into another great complex in this part of the city. Slowly, but surely, this part of the city will get a whole new look, an image of Belgrade we are fighting for – the mayor said and emphasized that there were 489 active construction sites in Belgrade at the moment.

– We focus on raising large office and residential facilities. The demolishing of the former Federal Ministry of Interior building began in line with the laws and regulations of the Republic of Serbia and the City of Belgrade, which the investor has great respect for and which will be honored in line with the guidelines for the permit for demolition, which will last until March next year. Our intention is to contribute to the development of Belgrade as a world metropolis through this project – Adir El-Al emphasized.

AFI Europe has been involved in the development and construction of commercial and residential facilities in Serbia for the past 15 years, including the construction of the Airport City and the Central Garden. They are also active in the markets in the Czech Republic, Romania, Bulgaria, Germany, Latvia and Poland. The company manages office buildings, shopping malls, industrial zones and residential facilities. This project's investors have a reputation as high quality contractors all over the world, along with personal and team experience, Beoinfo reports.
Companies:
Grad Beograd
AFI Europe Amsterdam
Tags:
AFI Europe
Sinisa Mali
Gili Dekel
Adir El Al
Airport City
Milutin Folic
reconstruction of Kneza Milosa Street
Central Garden
Share: