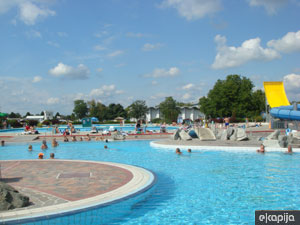 (Photo: Marija Kambić)
Originally announced as a secret investor, the owner of Montenegrin Aquaterra solutions d.o.o Sahret Hajdarpasic came to Nis with whom the City Hall signed a Memorandum of Understanding regarding the construction of an aqua park in Niska Banja totaling "at least EUR 9 m”.

According to the information the mayor of Nis Zoran Perisic presented to the Council this week, construction of indoor and outdoor pools should start in the fall, but at today's meeting held before signing of the Memorandum it was communicated that deadline for construction is three years.

The land was sold to a company of Italian businessman, Maurizio Zamparini, owner of football club "Palermo" d former Vice President of the Football Association of Italy. However, the mayor canceled sale, believing that land was sold at a low price.

Then in 2010 Italnis bought land from the City " to build an aqua part there.

In early 2013, Italnis gave up the investment, and the lot was returned to Nis.

You can read OVDE how this complex should have looked like originally.