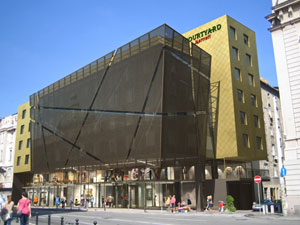 The very center of Belgrade, at the Republic Square, Saturday night, October 17, 2015, saw official opening of a four-star Courtyard Marriott hotel which is mainly intended for business people and for pleasure and rest of tourists visiting Belgrade, to anyone who can set aside EUR 115 for a night in that exclusive building.

The hotel, where the investor, PSP-FARMAN, poured almost EUR 20 m, started working in mid-September and by the end of the month coverage will be almost 50%, hotel GM, Mislav Mikasek said and outlined that they are very satisfied with visit at the beginning and that he expects businessmen all around the world.

The hotel has 112 standard rooms, on some 22 square meters, with modern bathrooms, equipped with a bar, TV, internet, iron, as well as two studios on 44 m2.