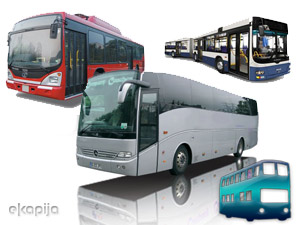 Invitation to submit entries is closed and the preparation of Comprehensive Land Use Plan for the bus station in New Belgrade is now underway, Branislav Popovic, director of the Belgrade Building Land and Development Directorate, said in his guest appearance on Pink RTV, Beoinfo reports.

– The Plan will be adopted either in late April or early May. In the current phase, we are polling bus station operators to get technical data from them. We are also going to hire the authors of award-winning work to elaborate the plans for this concrete location. Adoption of the Plan will be followed by a Request for Proposal for the preparation of final design. Money for this has already been provided and if everything goes as planned, the final design for the future bus station in New Belgrade should be ready this year. Also, construction of the route of the Inner Ring Road towards Tosin Bunar Street should be resumed soon. This will definitely relieve traffic congestion in the city – said Branislav Popovic.

Log in to view complete information:
Forgot your password? Click here HERE
For free test use, click HERE
Latest
Most read
Korlace mine near Raska for sale 16.04.2021.
Zlatibor destination booking system has starts operating 16.04.2021.
As of April 19, Serbian citizens can travel to Greece 15.04.2021.
Tender announced for expert supervision over the construction of the Morava Corridor 15.04.2021.
Gas Heating, Investment That Pays Off Quickly – Things Needed to Connect to the Network 08.04.2021.
Erich Cossutta, President of Confindustria – Our door is open to everyone who wants to invest in sustainable projects 11.12.2018.
VMC Building New Luxury Apartment Complex on Zlatibor 04.03.2021.
Plato Bezanija and a new complex in Cerak – Comfort and privacy for the family in the right place 22.09.2020.
Weather
Weather forecast