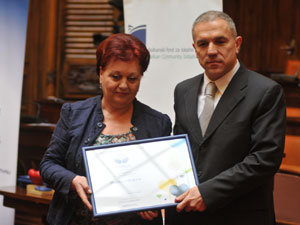 The 2012 Virtus Awards ceremony was held Saturday, January 19th, in the National Assembly in Belgrade. On that occasion, Radojka Nikolic, NIRA Press CEO and a member of this year's jury, presented Special Award for Media Contribution to eKapija CEO Zdravko Loncar.

- Only the great are able to recognize those in need and unfortunate ones and make helping them their priority. Aside from making donations itself many times, eKapija has always strongly emphasized acts of charity, primarily because we believe that one who does good always receives good in return, as well as because we, as a media company, want to help the establishment of a better system of values in our society. We are very pleased to receive this special award, as it proves that our efforts are recognized and will definitely keep us on the same path – said eKapija CEO Zdravko Loncar.

Virtus Corporate Philanthropy Awards were presented for the sixth time in eight categories to companies and enterprises that contributed to the general good in 2012 in the most effective manner - by providing support to non-profitable campaigns or civic society organizations.

Competition for Virtus Awards is organized by the Balkan Community Initiatives Fund (BCIF) with financial support of the US Agency for International Development (USAID) and in partnership with the Institute for Sustainable Communities and the Serbian government's Social Inclusion and Poverty Reduction Unit (SIPRU).