Miodrag Stojkovic, a geneticist and owner of Special hospital for in vitro fertilization, Spebo Medical - Lifestyle influences sterility to the largest extent 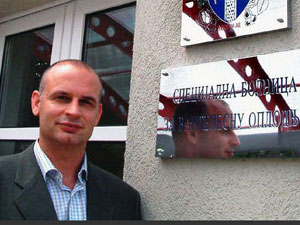 There is a street in Leskovac known worldwide. Not because of barbecue or chilly peppers but for babies.

In Norvezanska 16, there is a hospital of Miodrag Stojkovic, a world-famous geneticist and a big local patriot who opened in his home town an institution for sterility treatment.

In half a decade of work, couples from Singapore to America visited Leskovac and commitment of this expert and his wife Petra resulted in over 400 new-born babies.

- The last number of medical record is near 5000 and almost 10.000 people went through this hospital - Stojkovic says in his interview for eKapija.

Because of gratitude to his hometown, whose government in 2005 let the house and funded renovation and rehabilitation of a two-story building for the needs of the Spebo Medical, Stojkovic donated Leskovcu 108 free in vitro fertilization treatments.

Babies are, he says, their best advertising and their problem is lack of capacity.

- The only reason why we cannot accept everybody who would like to undergo treatment here is the working area. The team which works was recruited and educated both in our country and abroad. The option is to expand the hospital because we can help to a larger number of patients and hire young people. But, expansion is a question for other social structures. As a person who timely returns a loan to the state in order to equip this hospital, I have recently asked for a loan again and I myself expand the hospital. The negative, verbal answer was more political than logical.

As of December 2012, the hospital participates in the program of in vitro fertilization which is funded by the Republic Health Insurance Fund. How many couples have turned to Spebo Medical through this program?

- 34 couples have been treated in Leskovac through this program. The reason is that we have been listed this year and because Leskovac and other private clinics have limited access. The whole story was not fair for patients because they are the ones who should choose whether they will go to Belgrade for treatment, Nis, Leskovac, and not RHIF, If you are forcing somebody from the south of Serbia to go to Belgrade for free in vitro fertilization, that is no longer free of charge because a person must pay for an accommodation, travel, food,... 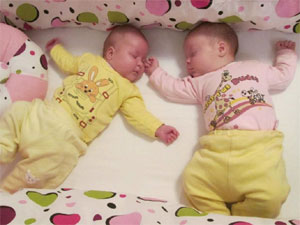 How much money for in vitro fertilization does Serbia lack?

- It has been assumed that between 60.000 and 200.000 couples in Serbia has sterility problems and if we know that it takes 3 attempts of in vitro fertilization, that is a large amount. Unfortunately, Serbia has limited funds and pays for only two attempts and the city of Belgrade donated the third. Slovenia, for instance, pays for six while in Israel every attempt is for free. On the other hand, patient's economic situation is a huge problem because most of them cannot afford in vitro fertilization and a part of them resigns from all kinds of things. They also feel abandoned, forgotten.

What does statistics show when it comes to success in this method of sterility treatment?

- With women from 20 to 30, success is 76%, from 30 to 40 up to 55% and above 40 18%. Also, chances that in vitro fertilization is successful are bigger in the second and the third time than in the first because female body knows what to expect every next time. Psyche is an extremely important in the treatment process.

We know about cases when women gave births in 47 while some of them do not succeed in getting pregnant in their twenties. What does it depend on?

- Unfortunately, nature selected it, i.e. biological clock. Out of a total number of couples that went through our hospital, we did only 1200, 1250 of in vitro fertilization. Sometimes it is, unfortunately, too late. Every fourth couple having sterility problems is coming with low reserves of eggs or decreased number or complete lack of sperm cells. These kind of people must go on sperm cell or egg donation or child adoption and they should be told not to waste time in these kind of institutions because these institutions can help people only when a women has an egg and a man has sperm cells.

The new Law of the Ministry of Health enables egg donation. Is is and since when is donation of eggs and sperm cells possible in Spebo medical?

- It is possible but is is not being carried out because we do not a system which could be applied professionally, ethically and in a health manner as it is done in other countries. This means a line of parameters which must be fulfilled before donation. Unfortunately, there is no gamete bank in Serbia. Therefore, we send these patients abroad.

Are there conditions determining who can get an egg of a sperm cell this way? 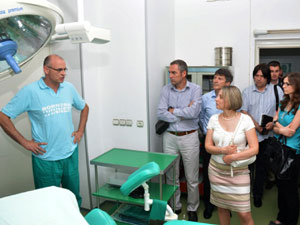 Spebo Medical has recently been visited by members of the German-Serbian association, among which eKapija was present

- Of course, there is an age limit. In the Czech Republic for example, up to 47 when it comes to women. Depending on regulation in some countries, there is an option that equal gender parents go on donation.

Donation of egg or sperm cell enables couples to get a child whose biological parent is only one partner. What is the attitude upon this matter in Serbia since we are still a conservative environment?

- A large number of people opts for this solutions because, however, it does differ from child adoption. Some people decide to go for both options, i.e. while waiting for child adoption, they go on donation. The most important is to protect parents, child and the family as a unit because of the conservative environment.

We are hearing it more often that marriage sterility is a stress consequence. Can we think of it as the most common trigger today?

- Lifestyle to the largest extent influences sterility, especially with men and stress is a part of an everyday life. Alcohol and sitting take the second place. There are also factors such as hormonal disbalance, oviducts problems, hormonal disorders, even ordinary allergy can cause problems. The number of sperm cells with men today is 50% lower in comparison to the number they had 50 years ago. Therefore, it is very important to start analysis in time, to look for a cause and when the cause is found there is a decision of whether to solve it or go round it.

Did NATO bombing affect sterility with men and women in Serbia?

You will manage the Kragujevac-based Stem cells Center. The contract has been signed and the construction is expected in 2014.

- I learnt to believe only to what I see. Therefore, I will believe in the Center the moment I see it because, as for now, everything is virtual. We have signed the contract for three times, shook hands, made photos...The City of Kragujevac donated land, students, professors, PhDs are waiting. If that is in 2014, I will be one of the happiest people.

What will you work on in the center? 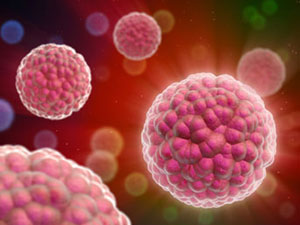 - I would like to continue in the center what I have started abroad and that is research of neuro- degenerative diseases, creation of, let's say, nerve cells in a lav but also research of stem cells from umbilical cord and marrow. So, a complex kind of not only research but also medical preparation of stem cells since I have already implemented some of them ten years ago but in our counrty, almost to zero extent.

How many stem cells banks does Serbia lack?

- A total of EUR 8 mil annually leaves the country because stem cells are sent abroad for preserving. According to the population figures, Serbia lacks 3 to 4 stem cells banks.

To what extent has Serbia stepped into bio engineering?

- Serbia is nowhere when speaking of bio engineering but that is not surprising when we take at the last place in Europe in the number of young researchers, only s while when we take a look at investment in science, only Albanians are worse than we are. We invest only 0,3 % GDP in science while some neighboring countries invest even 3,5%. Therefore, it is surprising a fact that that our science cannot not only to keep up with developed countries, but it also slowly extincting as the number of young people leaves.

Moreover, education system is not bad. There are no conditions for young people to have practical work and see what they are especially inclined to. There are more talented kids than talented professors for sure. In Kragujevac, I have ten pf them who could be better than their USA or England colleagues if they had conditions, but they do not. Therefore, they are not competitive and cannot compete with them. At the recent protest of scientists in Belgrade, 3 out of 5 people I spoke to, have a ticket to leave the country.