Milan Gutic, president of the Instel Group - Job alone is not enough for happiness 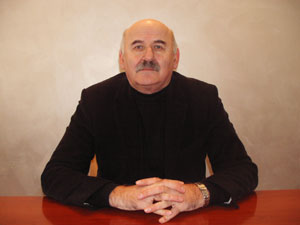 "If it fails to grow into spiritual sphere of life, business is like a tree that yields no fruit. Sooner or later, it will end up in a fire," Milan Gutic, president of the Instel Group, quotes a bishop, trying to stress that the economy and culture cannot develop without each other.

While doing his job, he has also been developing a club encouraging engagement in sports, recreation, culture, entertainment, science and faith. He has been building up his own spirit, as well as his relationship with other people. He says that a man is as happy as people surrounding him.

Milan Gutic, president of the Instel Group, has been in the same business for twenty years now. With a great assistance and support from his brother Vladimir and daughter Biljana, who are co-owners of the company, he develops Instel's operations in Serbia and the Republic of Srpska.

That was also a motive for him to support the formation of the Club of Businessmen of Serbia and the Republic of Srpska, which he says is an exceptionally good and extremely needed project.

- The Drina river flows to connect people. In the same way, the newly formed club should be a factor of cohesion between people and ideas, economy and culture - says Gutic.

The company Instel is engaged in telecommunications, water power, construction and energy projects, and it also bottles and sells spring water. On the territory of Serbia, in addition to Instel Inzenjering in Novi Sad and Instel in Belgrade, the Instel Group also has its offices in Zrenjanin, Kikinda, Subotica, Sombor, Apatin, Sremska Mitrovica, Nis and Uzice. It is also present in the Republic of Srpska, doing business through its branch office in Cajnic.

- Experienced investors suggest that not all eggs should be placed in the same basket. That is why we've decided to diversify our business – says Gutic.

Milan Gutic, engineer of telecommunications, mountain hiker, poetry lover and businessman, was born in Zenica in 1953. He grew up in a working family, with two sisters and a brother.

- What I've inherited from my family is a working habit. I decided to study technical sciences because anyone who has a profession fears neither war nor flood.

They had all lived well until the war, Gutic remembers, and then troubles came, but everything was much easier for those who had a job. 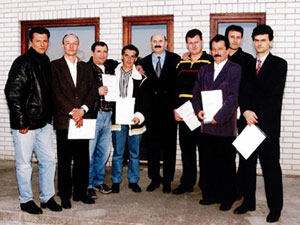 Milan Gutic with his employees at the company

- In 1992 I came to Zrenjanin with my wife and daughter and founded the company Instel (short for installation of telecommunications). The first service that the company offered was the construction of telephone networks, which we did very successfully. We were the leaders in Vojvodina and among the most successful companies in Serbia. After the Dayton Agreement was signed, about hundred workers from Bosnia-Herzegovina came to me, and we started a new business. The company then started building water supply and sewerage systems and gas pipelines. We founded a company in Belgrade in 1995, followed by those in Novi Sad, Kikinda and Sombor, and then we set up a company in Bijeljina in 1998. My brother took over Instel's operations in the Republic of Srpska. Today we own four legal entities: Instel Inzenjering in Novi Sad, Instel in Belgrade, Multimedija in Apatin, and Instel in Bijeljina. The Instel Group employs a total of about 150 workers - says our interlocutor, president of the group, who has left the management to his daughter.

Human happiness is a harmony between a person and his or her surroundings. Milan Gutic has always maintained a balance between his job and spiritual values. He is equally active in both fields.

- I am not a typical businessman. Business is too cruel and merciless. Job alone cannot make any person happy. While doing my job, I've also been running Instel Club, which was founded by late Dusko Trifunovic, Pero Zubac, Dobrica Eric, artists Ivana Zigon, Merima Njegomir and the prior of Velika Remeta monastery, Stefan. The Club has established the Instel Poetry Award, and it also publishes a collection of poems every year and gives it as a gift to friends and business partners.

When he replaced his birthplace Zenica with Zrenjanin, he easily fit into the new surroundings.

- Regardless of where a person lives, his or her success depends on the relationship with people.