Slobodan Djinovic, CEO of Orion Telekom - We will acquire several companies in the region

The company Orion, the youngest telecom operator in Serbia, is close to finish the negotiations on the acquisition of minimum two companies in the region. In that way, in addition to its Belgrade-based headquarters, the company will also possess a company in Montenegro, as well as in Bosnia-Herzegovina, Orion CEO Slobodan Djinovic announces in an interview for eKapija.

- We are still developing our infrastructure in Serbia in order to become more available to both physical and corporate clients. We have just launched a new service – IP TV, thus forming so-called "triple play offer" – telephone, Internet and television – Djinovic explains for our web portal.

When it comes to corporate users, the company will soon complete the construction of a Disaster Center, which will enable them to offer their clients all backup and related services.

Few days ago Djinovic came back from London where he spoke with representatives of the European Bank for Reconstruction and Development (EBRD) about the second round of funding that should help Orion expand. 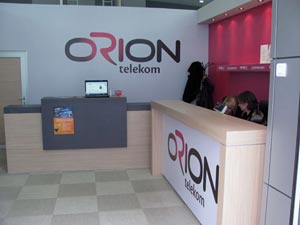 - We will first expand to Bosnia-Herzegovina and Montenegro. The plan is to acquire a company in Bosnia, and if negotiations take the right direction, we may even acquire more than one company. As far as Montenegro is concerned, we are close to an agreement with the partners we have been negotiating with over the last two years.

When asked what they plan to offer to these new markets, Djinovic replies:

- The offer for the new markets will include the entire range of services we are currently offering to people in Serbia. We will acquire companies that possess a different infrastructure, which will benefit Serbia as well. The plan is to introduce some new services to Serbia. When I say that, I primarily mean the services rendered via optical network to end-users.

By the way, ever since the company was founded, the EBRD has been holding a stake in Orion, which is why eKapija has wondered if the Bank is going to increase its stake in the announced second round of investments.

- The EBRD's stake will remain the same in terms of percentage, but since the new investment will also increase the company's value, they will participate in the new investment round. The value of this investment cycle will equal the value of the first one. Our job is such that, in principle, we are not going to stop making new investments and expanding, thus bringing potential investors, until we find a big strategic partner – says Djinovic.

The company Orion developed the first Wimax network in Serbia in 2003-2004, but Djinovic says that the problem is that they stopped at that.

- We are now technologically beyond that (Wimax). When it comes to technology, what should be interesting and what we will be able to offer to our users is LTE, which works on the same frequency as Wimax (3.5 GHz). That is something we will try to "bring" to Serbia in the following period.

Orion Telekom is a result of the merger of Internet providers SezamPro, Neobee.Net and MediaWorks. With the help of the EBRD, the company has so far invested about EUR 25 million in the development of infrastructure and, as they announced earlier, the plan is to invest about EUR 50 million until 2015.