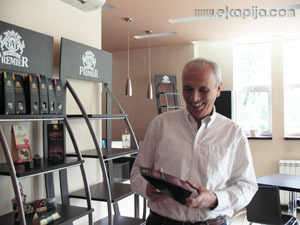 To some people, chocolate is a weakness or a minor sin. Some people are of the opinion that this sweet has a medicinal effect or that it is an aphrodisiac. There are also people who see chocolate as a business, or even more than just a business.

Guided by slogan "if we can not extend the time, we can extend the time spent in a quality way", Rade and Tatjana Vučićević have dedicated last twenty years to constant improvement, research and development. By using old, traditional methods and selecting top-quality ingredients, they were the first in Serbia to start manual production of chocolate dragees. It took over a decade for the proud holders of the title of Court Supplier to grow into a "Serbian brand".

- During the visit to a trade fair in Germany, we had some previously scheduled meetings with local businessmen. Explaining all the things that are necessary for a product to have to enter their market, they showed our dragees, while speaking of the packaging, and said: "This is how the product for our market should look like! - Rade Vučićević, CEO of Art-Ival, the manufacturer of pralines and other chocolate products of premium quality, with recognizable trademark Premier, starts the story for eKapija.

Always on the edge of certainty, whether to give up or to continue, he has spiced up all life opportunities with energy and aesthetics and put maximum effort in everything he has ever done. Although he has entered the sixth decade of his life, he still plays, just like he has been playing all his life. He played when he became a member of Cultural Artistic Association "Branko Cvetković" and when he later stood in front of the folklore ensemble as the choreographer. He was playing when he was selling souvenirs on Brač and pop-corns in Belgrade, and he plays even now when he is "his own boss". He never stops creating new projects.

And after all these opportunities, the only wrinkles he has are laugh lines.

He is a religious man who is not interested in "trucks and airplanes", he does not live to work, but works to live. He points out that, as the owner of a successful company, he does not have much money, but he has enough to live decently.

In his opinion, healthy family, friends, travels, concerts and theater enhance the quality of life.

- All our friendships originate from long time ago. We met all our friends in the folklore ensemble and each of them is in different business. I do not have any friends from the same business as mine.

He was born to a family of workers in Belgrade where he and his sister were taught discipline, responsibility and working habits. He graduated from the Faculty of Transportation in Belgrade, the Department of Railway Transportation. While still a student, he started dancing in a folklore ensemble, which marked not only his all life, but also the lives of his wife and children.

- At the time I was a student, one needed to graduate and get a job in a good company in order to have a good future. However, I got interested in folklore dance and I prolonged my student life a bit. I danced in Cultural Artistic Association "Branko Cvetković". Later I first became the assistant choreographer and then the choreographer. In that way I was distancing myself from transportation, but I mastered my organizational skills. I learned everything in that folklore ensemble. I was the artistic director for ten years and formed a folklore ensemble called "Oro". We were staying three months every year in Bol on Brač for eight consecutive years. A group of eight dancers and four or five musicians was performing in hotels. Although I was the head of the ensemble, I was also selling fifes, peasant shoes and other souvenirs. And everything was good.

My wife Tatjana used to dance in the folklore ensemble in Cultural Artistic Association "Abrašević" and we met there. Our son Aleksa was born in 1988 and we got our daughter Ivana two years later. At that time we founded an agency for organization of concerts, theater plays and other cultural events and various entertainment programs.

- Our folklore group was performing on television at the time. Then a guy showed up in "Branko Cvetković" and introduced himself as a show business manager. I had the agency and he asked me that we work together. Manager Ćira and I then started organizing concerts in the villages around Šabac and Koceljeva. Ćira was announcing concerts by putting up Ceca's posters, who was still a little girl at the time. On the day of the concert I asked Ćira where Ceca was and he replied "that is only a trick"... The concerts were not that successful and I decided to end my show business career.

Upon the formation of Art-Ival, the agency became its part. During many years of work, the majority of activities have been dedicated to organization of entertainment programs - prom nights, New Year's programs for kids, etc.

- Since 1991 we have been organizing prom nights in Hyatt hotel. If I knew that our cooperation would be so successful and long-lasting, I would probably do only that my whole life.

When the wife decides 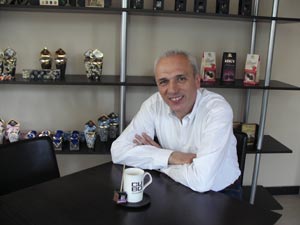 - We were always in a fuss, always chasing the money. And then my wife made me think about what we should do. She was the one to make the decision. I applied for the location for a kiosk and we unexpectedly got the location. In the meantime, we were selling pop-corns in two locations. The logo for our pop-corns "Kokice" was similar to Coca-Cola's logo. We had the branded sellers, carts and packaging.

- When we erected the kiosk, we did not know what to sell. We decided to make furniture by ourselves and open a coffee store, and then we decided to sell candies with coffee. We started selling the goods we were buying by writing cheques. The coffee sales were good.

Rade remembers that queues around the coffee store were 10 to 20 meters long.

- Then the competition appeared and I also found it too simple to only sell goods. My wish was to start a production. When we realized that our dragee sales were great, we started thinking in that direction.

When they decided to start a production of chocolate dragees, they were sure of one thing - that no experiments will be made with the quality. That first candy had to be of top quality and the only way to do that was to hire an expert in that field.

The head master for manually made dragees and pralines was Sreta Banković, a technologist with a great experience. Skeptical and distrustful, he was "reserved" when he entered the business. He later became its most important element.

The beginning of the production in Belgrade's settlement Braća Jerković was modest because it was financed from their own sources. After they got the notice that the facility would be torn down, they moved into the adapted restaurant of C market in Konjarnik, while after the privatization of C market, Art-Ival settled in new premises in Zemu.

Art-Ival's "Premier" dragees and pralines, made of the finest chocolate, and other chocolate delicacies can be found today in all major stores in Serbia. In spite of tough competition, they also entered the markets of USA, Czech Republic, Italy, Malta, Macedonia, Slovenia, Montenegro, Bosnia and Herzegovina and Croatia.

Rade and Tatjana Vučićević are proud of the fact that Art-Ival drew the attention of foreign buyers with its top-quality products. Pralines from "Serbian kitchen" have been presented at trade fairs Golfood in Dubai, Fancy Food in New York, Anuga in Koeln, Green Week in Berlin, as well as at the national exhibitions in Vienna, Frankfurt and Minsk.

For all people in Belgrade who love sweets, the company opened a chain of specialized stores - Chocolate Gallery.

- We realized that our products are best sold in specialized stores. We launched the Chocolate Gallery store chain, of which offer includes standard products and over 80 new products - pralines, truffles, chocolates, domestic cookies - says Rade.

I do not intend to stop now and I always know what to do next - says Rade and announces the opening of Chocolate Gallery coffee shops where the finest chocolate will be served with a various types of coffee.

- That is an experiment and the whole family will be involved. My children are management students and this is an ideal opportunity for them to show in practice what they have learned so far.