Dubravka Negre, Head of EIB Regional Representation for Western Balkans – Financial Aid to be Directed at Healthcare and SMEs 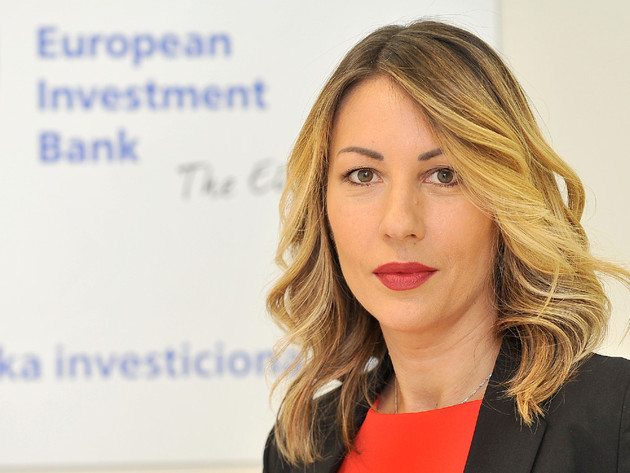 Dubravka Negre (Photo: EIB)
The European Investment Bank (EIB) is the bank of the European Union and the largest international financial institution in the world. In Serbia, it is known for financing infrastructure projects such as Corridor 10, the reconstruction of clinical center, science-technology parks and hundreds of local projects. So far, the EIB has helped keep more than 320,000 jobs in Serbia thanks to investments of EUR 1.8 billion in the Serbian economy and, due to the coronavirus pandemic, which has jeopardized many countries` economies, the EU institutions have prepared an aid package for the Western Balkans worth around EUR 700 million.

– The financial help provided by the EIB will be directed at the most urgent sectors, namely, healthcare and small and medium enterprises. We will continue carrying out the projects which have already started, which primarily pertains to the reconstruction of the Clinical Center of Serbia, as one of the most important medical institutions in Serbia and Europe, where over a million patients are treated each year. We will work on accelerating the realization of key infrastructure projects and incite new public investments so as to help the recovery of the public sector and the economic growth – Dubravka Negre, the Head of the EIB Regional Representation for the Western Balkans, says in her interview for eKapija.

eKapija: The EIB has approved a new aid package for countries outside the EU. It is worth EUR 5.2 billion. Which part is meant for Serbia and how will the money be allocated?

– A substantial part of those funds will be invested in the Western Balkans. When it comes to the distribution in the countries, it will depend on the real needs of each country and our bank has already contacted local partners. Serbia is the leader in this region when it comes to the scope and the number of investments and I believe that it will remain the leader in the upcoming period. The package provided by the EU institutions, which was announced recently, projects at least EUR 700 million for the region. We hope for an even greater amount.

These funds will be meant for key sectors, which currently need the help the most. Primarily, this pertains to healthcare, which is now on the first line of defense against the pandemic. That is why this sector needs to be strengthened even more, so that it would be able to react much more efficiently in such situations in the future, where human lives depend on good organization and how well equipped the medical institutions are. We now see how important the projects in healthcare were, for which we have provided EUR 250 million so far in Serbia. This especially pertains to the reconstruction of the clinical center in Nis, more than 20 regional hospitals and the Torlak Institute, as the key institution in the struggle against coronavirus. Thanks to the reconstruction of the Clinical Center of Nis alone, more than 2.5 million citizens of Serbia have access to better medical treatment conditions.

In the next period, we will support small and medium enterprises, while providing urgent financial help for solving the problems with liquidity and the necessary working assets. We will also work on accelerating the realization of key infrastructure projects and incite new public investments in order to help the recovery of the public sector and the economic growth. Finally, we will be there for local banks which are majorly affected by the crisis and provide adequate support for them, as we have done so many times in the past.

eKapija: In many countries in the region, Serbia included, economy experts have announced a drop in the GDP. What are your projections for this region?

– International institutions expect a drop of 2-4% for Serbia, but other countries in the region will react to the crisis in a similar way, depending on the state before the pandemic, the economic measures they`ve envisaged and the quickness of recovery after the crisis. The fact is that a drop of foreign investments will affect all countries, the public debt will additionally increase, and the production volume has already drastically reduced in most industries and it remains to be seen how quickly the economy will recover. What`s especially important is that, in this period, the EIB will make its rich expertise and technical help available to all countries in order to have the new and the already started projects realized as quickly and efficiently as possible and have the existing financial funds mobilized in the most urgent sectors.

eKapija: The Government of Serbia has recently announced an economy stimulus package. How do you rate these measures?

– What`s good is that the post-crisis period for the economy is already being considered. To us as a bank it`s important that we are already communicating with business partners and institutions and that we are planning future investments and a continuation of the started projects. In that sense, the government`s measures are useful in the given situation, especially since they`re directed at supporting the economy. What`s especially important is also to what extent companies will be able to use those benefits and implement them efficiently, in order to recover their business.

What we can offer to the economy are credit lines at the most favorable conditions, which we launched earlier with commercial banks. Of those funds, around EUR 75 million is still available to domestic companies, and we will see how much we will set aside as part of the new financial help package for the Western Balkans, adopted by the EIB Group. So far, in our country, we`ve helped more than 11,000 small and medium enterprises, 900 micro enterprises and numerous startups. We are also realizing the projects of the construction of science-technology parks in Nis, the BioSense Institute in Novi Sad, but also other projects in science, which will further incite innovations, the sharing of knowledge and the competitiveness of the Serbian economy in European and global markets.

eKapija: A contentious issue was the measure of help whereby each citizen of legal age stands to get EUR 100. To what extent is this measure efficient?

– This kind of move is the last resort, which directly stimulates consumption. On that hand, it`s a useful short-term measure and one of the fiscal policy instruments that the state can adopt, but, for a long-term recovery of the economy, it`s crucial to give further stimulus to entrepreneurship, in order to create the conditions for keeping and creating new jobs. That`s one of the strategic goals of the EIB, which has helped save 320,000 jobs so far thanks to investments of EUR 1.8 billion in the Serbian economy.

eKapija: Reuters estimates that the recovery program will cause an increase of the deficit in Serbia and that the Serbian economy will face a recession. What is your scenario for the upcoming events when it comes to Serbia?

– The situation will certainly be hard and a long period of recovery awaits the entire Europe, where it will be important for all institutions to cooperate even more closely, to network and share their expertise in order to strengthen the management of public investments and incite their development. We will be there to support both the private and the public sector, as well as local self-governments and the banking sector, in order to continue the public and private investments and incite economic growth. That`s what the speed of recovery will depend on, and that entails primarily a return to the state before the pandemic and then a continuation of the growth.

eKapija: In late March, Fitch Ratings confirmed Serbia`s credit rating at BB+ with a stable outlook for further improvement, despite the coronavirus crisis. Can we expect this rating to remain unchanged?

– Important factors that will have an influence are also the speed at which the project of public importance will continue and direct foreign investments, which will certainly dry up in the upcoming period, as foreign investors will first need to support their own economies. It is apparent that the unemployment rate will increase, as everywhere in the world, and that the economy will stagnate for a while, until the most urgent problems are solved. There are truly many factors in play and it will all depend on how quickly Serbia can go back to the state before the crisis. Our goal as a European bank is to support this as efficiently as possible, through finances and expertise, as we have done before every time.

eKapija: At a recently held webinar, you stated that the developments in Europe will spill over into Serbia, as 70% of the Serbian economy leans on the European one. At the moment, how are the EU states coping with the coronavirus consequences?

– At the moment, when the state of emergency is still in effect, it`s important to save lives. We will only know the true state of things once the pandemic ends, and it will not occur simultaneously in all countries. What we see is that certain industries, such as the aviation industry, the car industry and tourism, are especially affected. Also, we learn every day about the increasing number of people that are being laid off due to the crisis, and the recession is expected to be even bigger than the one in 2008. For those reasons, the EIB Group has also prepared a set of urgent measures for the EU states too, which will enable them to recover their economies quickly and to strengthen their health systems, as we see how important it is in these situations. At the moment, with over EUR 5 billion in investments, we are involved in a great number of health projects directed at the modernization of medical equipment, capacities and organization in the EU states and in researching infectious diseases and developing vaccines and medicines, especially for coronavirus.

eKapija: What are the next steps and plans of the EIB for Serbia and what are the main projects for 2020?

– We are already in contact with our local partners and we are talking about how to most efficiently use the financial help provided by the EIB. It will be put in the most urgent sectors, namely, healthcare and small and medium enterprises. Also, we will continue with the already started projects, which primarily pertains to the further reconstruction of the Clinical Center of Serbia, as one of the most important medical institutions in Serbia and Europe, where over a million patients are treated each year. We would also like to highlight the project of the digitization of schools, which we are planning in cooperation with the Government of Serbia.

The importance of these initiatives, which entail making schools capable of remote learning, is best seen in these situations. I would also like to mention the continuation of infrastructure projects related to the reconstruction of transport, water and sewer networks, as well as the implementation of a new ecological policy of the EIB Group, which will stop financing any fossil fuel related project by 2021. We will therefore incite investments in initiatives which aim for a cleaner environment and social and economic sustainability.