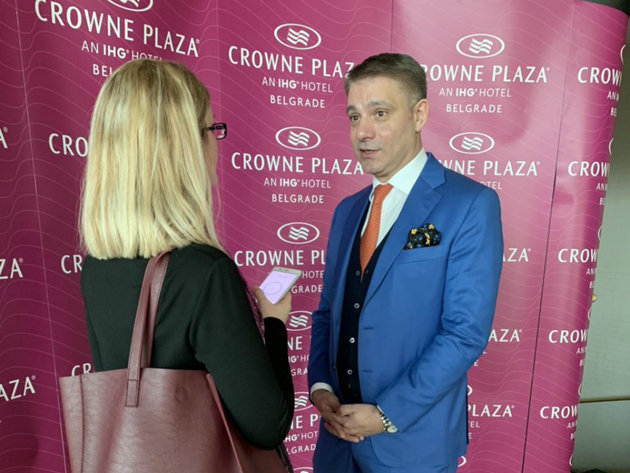 We talked to Vasic during the Adria Hotel Forum, held at Hotel Crowne Plaza. When it comes to new hotel investments, he pointed out that he believed that there would certainly be new investments in the next period.

– What I can announce is the construction of Hotel InterContinental in Belgrade, as we've finally made progress with the permits. We have not yet come to the point where we would be able to start building, but we have signed an agreement with the InterContinental Group and the Delta Real Estate team is now preparing the project. The design has already been done by a German company, so I can say that we've made considerable progress – Vasic points out for eKapija.

This year, the Adria Hotel Forum brought together more than 350 participants from 20 countries of the world, and, in addition to the investment potentials of Southeast Europe, the conference also dealt with the challenges faced by the hotel industry. One of the burning issues, the forum participants agreed, is the lack of labor force.

Zivorad Vasic pointed out the fact that the hotel business, just like other industries, experienced great problems when it comes to employment. As he pointed out, people left from Serbia to Croatia, Italy, Scandinavia and America. As for specific professions, Serbia doesn't only lack hotel maids and waiters, but managers as well.

How to solve the problem with the lack of labor force in the hotel business was one of the questions that the participant in the panel titled “Employees are 30% of every hotel costs - and rising problem in hospitality industry. What is the future model of employment and where the employees will be coming from?” tried to give an answer to. Did they manage to do so?

– I don't believe that we did. The problem with panels in the hotel industry is that they are only attended by those who talk and not those who listen. It's true that there were plenty of people there, more than 200. Still, it was apparent that the room was not full – Zivorad Vasic says.

Nevertheless, he points out that he believes that this will change in the future.

– I believe that this will change in the future and that all those trends I talked about at the panel will take root, namely, sharing labor force between two hotels, talks between real estate companies and general managers on a much higher level, where it will be known which new hotel is being opened, so that we could prepare for it. Also, it is very important to educate the employees and to open training centers, as there's only one such center in this part of Europe at the moment, the one in Montenegro – Vasic points out.

He expressed hope that a project which already exists in Western Europe would take root in Serbia.

– My idea is to open a hotel that would act as a training center for employees. The price would be low and students might go through training there and be paid for it. They would have to sign a kind of a contract with us, so as to secure their loyalty over the next few years – eKapija's interviewee says.

At the panel, Vasic invited investors to invest in the countries of the Balkans, because, as he said, they truly have something to offer, and more and more tourists want to visit this, still largely undiscovered, part of Europe. Considering that a large number of hotels have opened in the past years in Belgrade, we asked our interviewee if there's room for the opening of new ones in the Serbian capital.

– I am not sure if there's room for more hotels, but I am certain that there's room for much higher average accommodation prices. Comparing Belgrade with Zagreb and Ljubljana, it's apparent that the average price in Belgrade is lower by a half. What hotel owners in Serbia need to do is for us all together to go towards increasing the average price of hotel accommodation in Belgrade. There's no reason to pay up to EUR 100 more for a room in Zagreb or Ljubljana compared to Belgrade, which truly has something to offer – Vasic says.

After six years in Zagreb, the Adria Hotel Forum was moved to Belgrade, and it was Zivorad Vasic who had encouraged Marina Franolic, the organizer of the forum, to make this step.

– Marina is truly agreat person. This year, she made a big step forward when she decided to move the event to Belgrade. I used to visit the Adria Hotel Forum while it was held in Zagreb as well and I believe that the conference went as far as it could there and that it would only go downwards from there. I believe that it is important for the conference to be of regional character and for it to be organized in Belgrade this year, in Zagreb next year, then in Sofia, in Ljubljana... The Adria Hotel Forum has reached a certain level and people feel good here. The panels are attended by speakers we saw before at the forum, and there are always new people. I therefore believe that it's time for the conference to become regional and then European in character – Zivorad Vasic says for eKapija.