WHO ARE THE WINEMAKERS OF SERBIA: Bozidar Aleksandrovic – Regent 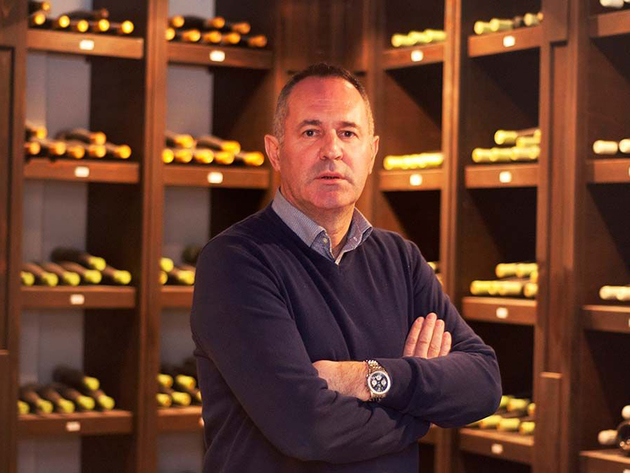 Bozidar Aleksandrovic (Photo: Ivana Cutura)
The fate gave him his profession and his name and then a recipe for success later on as well. He was born on Christmas 1966 as the fourth generation of grape and wine producers in the Aleksandrovic family. He grew up alongside vineyards and orchards and he claims that there was never any doubt as to what he would do in life. In the fourth grade, he learned to prune the peach tree, and in the seventh grade, he extended the knowledge to the grape vine. In 1991, he was one of the first people in Serbia after World War II to produce a wine with his own label.

Bozidar Aleksandrovic, owner of the Aleksandrovic winery in Topola, is also one of the originators of modern winemaking in Serbia and the keeper of the tradition of the royal cellars in Oplenac. Their most famous wine, Trijumf, is produced after an original recipe of the Karadjordjevic dynasty. The Aleksandrovic winery has been on an upswing since 2000 and now it produces around 300,000 bottles annually and has 75 hectares of its own vineyards. They have won numerous awards, and their wines are consumed from Japan to California.

– I have six daughters, the eldest of which is 25, whereas the youngest is 2, and I am sure that they will continue the family tradition. If I were in any other business, I might have doubts. However, this is the best job in the world – Boza Aleksandrovic begins his interview with our portal.

– My great-grandfather Milos started the family tradition of grape and wine production. He was one of the founders of the famous Vencac cooperative in 1903. My grandfather and father continued the family business, and I entered winemaking professionally in the late 1990s.

Prior to that, in 1991, after I graduated from the Faculty of Agriculture in Zemun and as soon as I was legally allowed to do so, I produced the first wine with a label in Serbia! From 1945 until 1991, labels were a privilege of state companies, whereas us small producers were oriented towards the production of grapes, which we would forward to them, being allowed to make wine only for personal consumption. 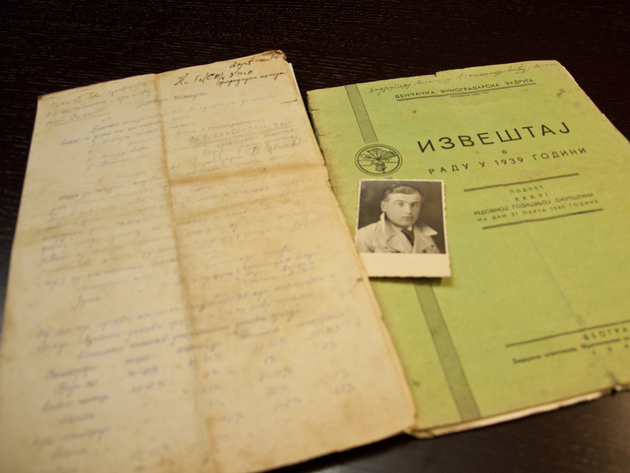 Zivan Tadic, the king`s wine cellar master, who sent the recipe
The news spread not just in our village, but in the entire region as well, it was a sensation in a way. A family friend of ours wrote to his uncle, who had emigrated to Canada after World War II, that “Aleksandar Aleksandrovic`s grandson has made a wine with his own label...”.

This was the turning point, like winning the lottery, or stumbling upon something of great value... I can safely say that this has changed my life.

“You can`t be a winemaker working from an office...”

– In the 1990s, during the wars and the inflation, we sold 3, 4, 5 thousand bottles a year, mostly to more prominent restaurants... Top enologist Vlada Nikolic and I assembled a team in the early 2000s, when the banking system and the entire country stabilized to an extent. The aim was to produce handmade wines and to try to bring back local winemaking to the level of quality it had at the beginning of the 20th century.

The market soon recognized this and that`s when the history of modern Serbian winemaking started, the winemaking concerned with quality, as opposed to mass industrial production.

When we started, we had 3 hectares. We were establishing vineyards, buying land... Today we have 75 hectares of our own vineyards and we produce around 300,000 bottles annually, depending on the year. 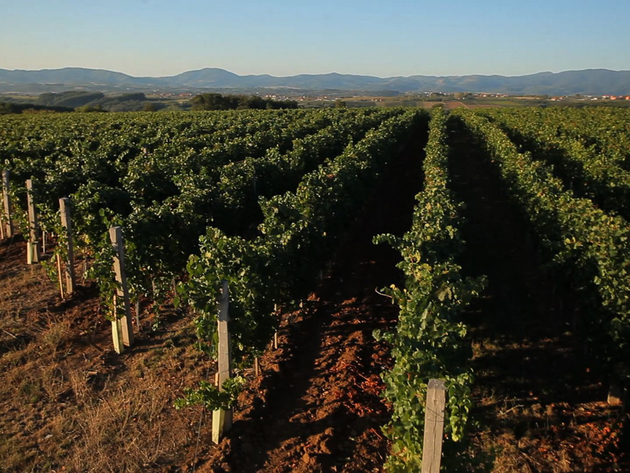 The Aleksandrovic winery now owns 75 hectares of its own vineyards
The winemaking and vineyard business is tied to the nature, that`s where it all takes place, that`s where it all begins and ends. You take a tour of the vineyard every day once it starts growing. You check the sprouts, see what to do next – the vineyards tells you everything, you just need to understand it. This is not a job to be run from an office.

We started with Trijumf, and now we also have 3 sparkling wines, a whole range of white, red and rosé wines, including renowned brands – Trijumf, Regent, Rodoslov, Harizma, Euforija, Varijanta... We are focused exclusively on the best hotels, restaurants and specialized stores. Our aim is not to sell at any cost. Around 25% of what is produced is exported – to Japan, China, Russia, Western Europe, United States of America...

We are present at all important fairs throughout the world. We are also paying more and more attention to taking part in wine dinners, which allow the restaurant`s guests to get to know the winemakers while enjoying the food and the wine.

– I am fully convinced that Serbian wines can compete successfully with those produced in the world. I am proud to be from Serbia and I am a great aficionado of all local wines – whenever I have the opportunity, I make sure to witness how my colleagues make wines, how their vineyards grow...

There`s no competition in this business. Have you ever heard that, for example, Olja Ivanjicki`s paintings are a competition to the paintings of Milic of Macva? Each soil produces a different type of wine, specific flavors, fragrances... Each winemaker puts in his knowledge and creates an original product. Serbia now has dozens of wineries making quality products.

A big problem outside the region is lack of recognition – for a long time, people didn`t even know that Serbia had vineyards and that it produced wines. Still, the fact we come from a country that is not normally recognized as a winemaking country is also an asset, as there`s the surprise factor. Wine connoisseurs love to try something new, as they`ve had enough of Spanish, Italian, Portuguese and other famous wines. Restaurant owners and wine stewards like to surprise their guests, as it is also a matter of prestige. 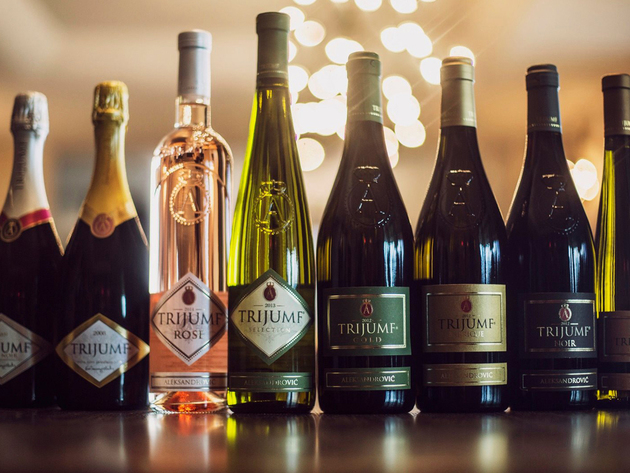 This exotic factor, then, in addition to the quality, has enabled the Aleksandrovic winery to be included in the wine menus of the most renowned world restaurants, including those with Michelin stars. This is the equivalent of playing a Grand Slam tournament.

Looking at the sky

– Fear of bad weather is something members of the Aleksandrovic family are born with. Agriculture was the only job for our family for generations and our existence depended on the nature and God. I remember as a child that, whenever clouds would gather, everyone at home would be afraid.

Three minutes of hail are enough to cause several years` worth of damage. I sometimes say that I feel like a gambler at a casino. You start producing “with your pockets full”, and you have no idea how much you`ll have when you get out.

There have been difficult years... I still remember 2014 and the constant rain. We had black grapes on 39 hectares at the time, and we didn`t produce a single liter of red wine.

We are all God-fearing and slightly superstitious in this business. We celebrate our patron saint`s feast day, the Saint Tryphon`s Day, regularly and we pray to God to watch over us.

“Sometimes the wine sings, other times I do”

– It is well known that wine is drunk by a fork. The symbiosis of good wine and good food, matching the food with the wine`s flavor and fragrance, is what transports us to seventh heaven. More and more restaurants in our country take care to assemble good wine lists and offer top quality wines.

In general, wine culture is developing in Serbia, which has been especially noticeable in the past ten years or so. Also, quality local wines, made in Serbia, are consumed increasingly often... It`s a matter of general education. When you visit Tuscany, you drink Tuscany wine, when you go to Tokaj, you drink Tokaj wine. When you come to Serbia, you drink Serbian wines.

I like to sing along with wine. Sometimes the wine sings, other times I do. 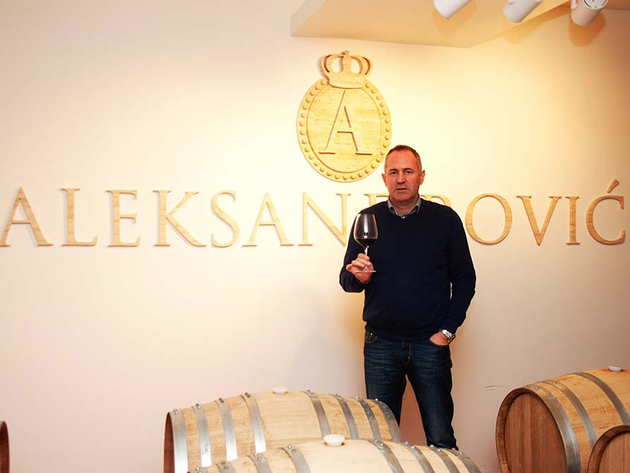 – They often ask me if this job is profitable. The biggest problem, in addition to being dependent on the climate and the uncertainty of the production, is a slow turnover. A vineyard produces yield 3 years after the sowing. With black grapes, you need another 3 years for red wine, as it has to mature.

This is a job that requires several generations. The second and the third ones usually work much less and enjoy much more.

The good thing for me is that I started working a long time ago, relatively speaking. We are now at the beginning of a big international career. We have older vineyards, we are already experienced and have managed to attract attention. One needs to work and progress and this is where I see our path of development. Also, our next stage is investment in a more substantial development of wine tourism.