International company for physical-technical security “Securitas”, which is active in more than 30 countries, bought the reknown Belgrade company “SCP International” last summer, therefore this domestic company became the first from the Balkans to be wihin the global system of “Securitas”, and from December, 15th, it is active under the name “Securitas Services” Belgrade.

- “Securitas” company was founded in Sweden in 1930, and today it is present in 30 countries of Europe, North and South America and Asia, and it has around 240.000 employees. It holds about 16% of the share at the world market of security services. In 2007, it made a profit of 6,5 billion euros, and for 2008 it is expected even better result. Primary activity of “Securitas” is providing security services, in which the central spot is reserved for the specialized guarding service, mobile teams and alarm-monitoring. “Securitas” also offers consulting services, investigation jobs, transportation of money as well as handling valuable property through its specialized company, “Lumis”.

- Business philosophy of the company is – People make us diverse and it is not only a line that the employees of our company are our biggest value. All employees are encouraged to be positive and useful personalities at work as well as in life, and mostly we succeed in this – proudly explains Djordje Vucinic.

eKapija: Is “Securitas” doing business in the region and is Belgrade going to become a central office for surrounding countries?

- We are the first company bought by “Securitas” on the Balkans. They estimated that Serbia is in the economic growth. However, Belgrade is not going to be central office for other states of this region, but those countries will have independent companies, if the central decides so.

eKapija: “Securitas” company announced more acquisitions in Serbia. Which companies are in plans?

- “Securitas” company announced that it wished to buy few more companies in Serbia. They have in mind some of the companies they would like to take over, but I’d rather not talk about them. At the moment, we are making realization of the plans for development of “Securitas Services” Belgrade. 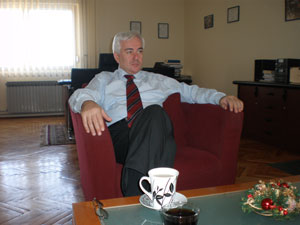 eKapija: In which sectors will the new owner invest?

- The new owner intends to introduce new, more quality procedure and to implement higher standards of business. Future investments will be directed towards the purchase of equipment, modernization of IT system and training of employees. Like I already said, “Securitas” gives special attention to its employees, therefore all of our workers, a total of 1.600, will go through a special professional training. Best service can only be expected from specialized and highly trained staff. Partnership with “Securitas” will bring to the security market of Serbia new, unknown services to this country.

eKapija: What kind of security is your company involved with and what will be the new in the offer?

- Our company is specialized for offering services of physical-technical security, transportation of money and values and alarm monitoring. In the next year we will introduce new services of patrol cars, mobile teams and another services in physical security. I would specially mention patrol cars, as a service by which the client gets protected by a mobile patrol in the city zone, in agreed paste of tourings. The client is free of expenses of static security, while mobile security arrives in the shorter and more efficient deadline. They are technically related with our center and with the patrol on the field. The service will be expaned to patrol cars in specific parts of the city, where tenants will be paying for security.

eKapija: Who are your biggest clients?

- Our biggest clients are the banks – Vojvodjanska, Murffin, Commercial, Univerzal, Credy, AIK, KBC, then Sava insurance, as well as numerous companies, like “Imlek”, “Knjaz Milos”… We secure 500 objects in 60 cities in Serbia, and at the moment we hold the 3rd place as a security company in Serbia.

eKapija: When will the work of these kind of companies be legally regulated?

- The new law will be in the procedure in the next year. It will not solve all the problems, but at least statuary ones and organizational clauses. It will resolve the question of licencing for the companies and people. Our staff will get working licence only after training, medical examination, biography checkings. Parallel to the law we are also working on standardization of our services with Republic’s Institute for standards. The law and standardization should regulate the market of security services in Serbia, stated Djordje Vucinic at the end of our conversation for eKapija.