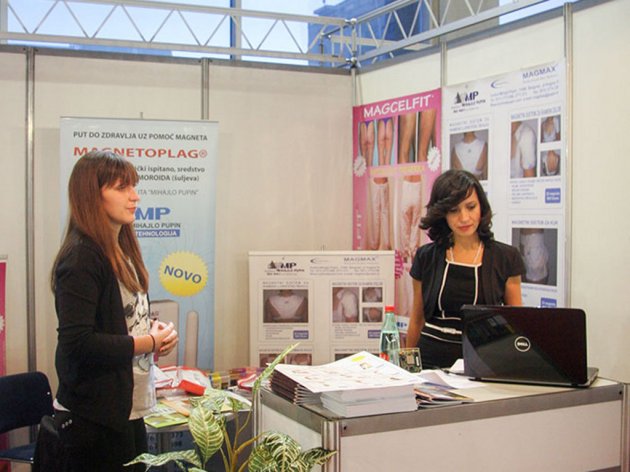 Jelena Vasiljevic, on the right, atthe stand of the Mihajlo Pupin Institute, at the Fair of medicine andstomatology (Photo: sajam.co.rs)

At this year’s Fair of medicine heldlast weekend in Belgrade, the stand of the Mihajlo Pupin Institute was “crowdedwith" curious visitors who wanted to find out everything about newsoftware – innovation of this institution which diagnose primary cancer inbones cancer metastasis.

Dr.Jelena Vasiljevic, the most involved in the software development which isher PhD spoke about the new computer method. The software was developed incooperation with the Institute for pathology, the Military-Medical Academy(VMA) and one university from Australia and it was upgraded at the Faculty forInformatics.

- It is the existing software taken over as open source and modified for largeimage files. My idea was to implement software for biopsy images withhypothesis that parameters after the analysis will be in correlation with somefeatures of cancer affected cells which turned out to be right. At the Fair oftechnique, we were awarded for checking these correlations and it was necessaryto automatize everything further and enable it to be easily available for usage– Vasiljevic says for "eKapija".

Our collocutor explains that the procedure of software usage is very simple anddiagnostics is based on multi-fractal image analysis. The biopsy sample is let through the softwareand with one click, in a few seconds, we get the information on which organ andhow reliable primary cancer is.

Reliability of this diagnostics method in some cases is up to 90%.

- Doctors observe biopsy samples through a microscope and they define their opinion based on that. New methodology significantly saves times in diagnostics since you only need a few seconds to discover primary cancer and subjective error options is decreased which will help pathologists to check their diagnosis.


As for now, software is used forprimary cancer detection in bones metastases to define whether it is on lungs,breasts or kidney and Vasiljevic outlines that it is modular and that it couldeasily be implemented on other cancer or metastases types as well as in otherorgans.

Vasiljevic mentions that further researches are possible and that samplecollection which is the longest research process is the biggest problem.

Innovative software has not found in its usage in health institutions yet butVasiljevic expects it could happen soon.

DECIM (Detection of Cancer on image Microscopic) – a software method for the supportin diagnostic of cancer based on special multifractal analysis of the image of theMihajlo Pupin Institute received the biggest acknowldegmnet at this year’smedicine fair and "Medident"award.

More than 50 exhibitors presented themselves at 39th Fair ofmedicine and stomatology, held October 9-11 in Belgrade.