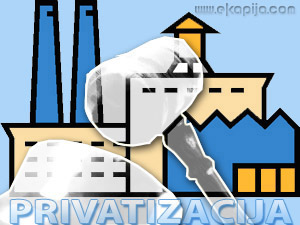 Deadline for applications for privatization of 502 companies published by the Government of Serbia has expired today and not many letters of interests arrived, Ljiljana Rainovic, an expert for privatization has announced today at the Belgrade Chamber of Commerce.

At the round table "The Law on privatization – practical implementation and open questions" , she estimated that there will be more demands for preparation and facilitating the privatization subject than interested buyers.

According to her, in solutions for ending up privatization process in Serbia there is a chain which lacks and that is election of an authorized actor which would, on behalf of the state, generate right measure and privatization method for every company listed.

- Now the companies are doing it. They mostly offer solutions providing consultants who generate sales plan which is after that adopted without any additional analysis.

Apart from that, the state should hire a special institution to solve liquidity of companies in the privatization proves since it is one of the main trouble spots, Rainovic pointed out.

Privatization models provide buyers to engage more so that privatization would end up positively. As for now, majority of cases will step into bankruptcy, Rainovic outlined, it was stated at the announcement of the Belgrade Chamber of Commerce.