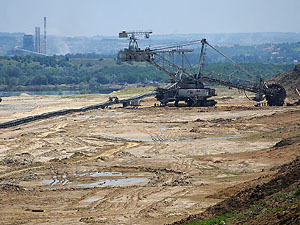 Tender for water pumping out from Tamnava - Zapadno polje open pit mine will be published in the next two day, Milorad Grcic, General Manager of the Mine Basin Kolubara has announced today.

- We are not looking for pumps to rent but water pumping out and mud removal service – Grcic said at the press conference, adding that the mud quantity in the open pit mine is still unknown.

After the floods in May in the Tamnava - Zapadno polje open pit mine, there were 210 milion cube meters of water.

The General Manager of the Mine Basin Kolubara said that whoever applies for a tender will have to submit an elaborate on water pumping out, drying out and field estimation after pumping put.

Grcic said that the interested will have 10 days to apply for a tender.

- Deadline for pumping out water from Tamnava defined in the tender will be 105 days – he said.

When asked whether it is enough time to pump out all the water, Grcic said it is a complex task and that it does not depend only on equipment but weather conditions as well. Nine dredge machines and a lift machine were flooded in Tamnava.

According to him, they will not wait for 105 days to start the equipment overhaul but as the water level decreases they will work on it. Grcic said that a dredge at Tamnava started working but on coal production but on barren soil removal because, as he added , without removing coal overburden layers, coal production cannot start.

- Coal production from the Kolubara pit mines in the first half of August should reach 65.000 tons a day – Grcic said.

The General Manager of the Mine Basin Kolubara said that another dredge has recently been saved and it has already been overhauled. When it starts working, it will generate 20.000 tons a day.

Grcic said that with these 20.000 tons of coal, total production will reach targeted 65.000 tons a day which is 75% out of planned coal production in Kolubara which totals 90.000 tons.

When asked whether there will be sufficient coal for electricity production in the winter season, Grcic said that the Mine Basin Kolubara already delivers more coal than anybody expected.