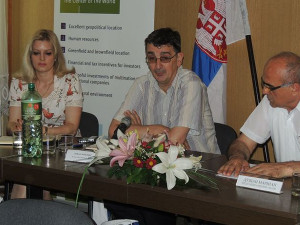 By the end of the year, i.e. immediately after obtaining necessary permits, with the support of the New Adaptix Fund, Eko s energo headquartered in Glozan at Vlasotinca, is planning to start construction of two electricity production facilities from biogas in the working zone at Karavukovo, it was published at the official site of the Odzaci municipality.

At least 30 people will be hired in these departments. Apart from that, Eko s energo’s investment will contribute to development of agriculture in Odzaci because green maize mass, millet and other plants is used as raw material for gas.

At the meeting with investors, the municipal president, Dusan Marijan, said that the local self-governance supports arrival of any investor who will enable new hires.

- We will provide the company a location and fast documentation issuance. The arrival of this investor which would produce green energy means a lot to this municipality– Marijan outlined.

The construction of two electricity production facilities from biogas, with the production capacity of 999 kWh, should occupy thirty hectares in the working zone at Karavukovo. When the electric power plant is put into operation, which is expected in the second half of 2016, 25 workers in each department will get the job, with an increased number of seasonal workers; it was published at the site of the Odzaci municipality.

Fertilizers and heat energy which will, according to Dragan Stojanovic, will be used for greenhouses heating whose construction is also comprised in the project will be generated as an additional product in electricity production. Organic will be produced.

Favorable geographic position of Odzaci municipality as well as big potential when it comes to renewable energy sources (biomass first of all), influenced investors to invest in our municipality. This is the second project of renewable energy sources exploitation which should be implemented in the working zone at Karavukovo where ten hectares was already planned for installation of solar park in line with the project of Slovakian company Green energy. Business plan of Primar tehno from Maglic, which expressed an intention to build a bioethanol plant in the working zone of Odzaci has recently been approved by the local self-governances – representatives of the Odzaci say.