’’Zdravlje’’ extends its business – More jobs for people of Leskovac 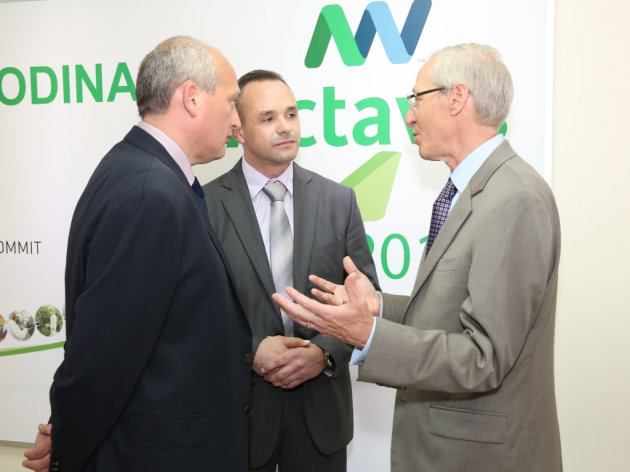 (Marjanovic, Jovic and Kirbi) Pharmaceutical factory ’’Zdravlje’’ Leskovac, will employ significantly more workers next year, in virtue of optimization of business operations, investments in modernization and increase of production volume, said Bojan Jovic, CEO of the company, on Thursday (12 June 2014), after the visit of American Ambassador Michael Kirby.

- I still could not talk about precise number of newly employed, but it is going to be the most significant increase in the number of workers since privatization. We intensively work on new products. A new plant for the production of a cure for Parkinson’s disease works with its full capacity. We have employed 16 new workers so far – said Jovic.

Ambassador estimated that ’’Zdravlje’’ is an example of a modern factory which fully meets the requirements of world pharmaceutical production.

- Together with my colleagues ambassadors I often discuss topic how to help Serbia raise the level of employment, and one of solutions is a factory such as ’’Zdravlje’’. This company wants to grow and develop, and to offer modern therapy to Serbian citizens at reasonable prices. That is why it is necessary to create conditions through cooperation with Serbian authorities who are engaged in health care – said Kirby.

Mayor of the town of Leskovac, Goran Cvetanovic, pointed out that ’’Zdravlje’’, with its socially responsible operations and support to different fields of economy - health care, culture, sports - is substantial for the town.

- This company has shown highly comprehension for numerous challenges of Serbia and its patients, while its main goal is to provide them with new generation of medicines, such as those available to American, Canadian or EU patients – said Pavle Marjanovic, CEO of ’’Actavis’’ in Serbia and Montenegro.