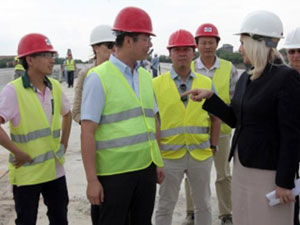 While touring the construction site of Zemun – Borca bridge, Mihajlovic said that is the only infrastructure project meeting predicted deadlines and added that a new access road, from ‘’Novosadski put’’ to ‘’Zrenjaninski put’’ will be built by the end of the year.

Deputy Prime Minister said the bridge will be completely joined by the end of July, pointing out that the right lane of the bridge is already completed and approximately 150 meters of bridge are left to be built in the left lane.

She stated that Serbian infrastructure projects value a few billion euros, while Belgrade projects, funded together with the government, cost more than EUR 600 million.

Minister Mihajlovic said that Zemun – Borca bridge construction project has a mentor from the Ministry who is in charge of it and mentors for other projects in the department have been named, as well.