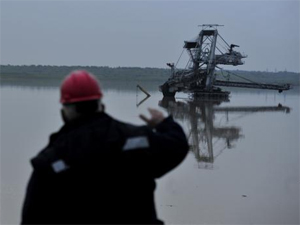 He said at a session of the Republic Department for Emergency Situations in Belgrade that the activities on the Sava River near Nikola Tesla Thermal Power Station (TENT) in Obrenovac had prevented a damage of between 500 and 600 million euro that would be caused by the shutdown of power generators.

- Thanks to Slovenian pumps and incredible efforts by people, we managed to defend TENT and prevent a damage of EUR 600 million - said Vucic.

He noted that it was necessary to recover Kolubara Mining Basin as soon as possible so Serbia would not have to import electricity.

- The failure to transport coal (from Kolubara Mining Basin) to TENT would cost us between 0.5 and 1 million euro per day - said Vucic.

Vucic stressed that there had not been power cuts in Serbia and the power supply was stable.

Mining and Energy Minister Aleksandar Antic said that about 7,700 households were without electricity, adding that Obrenovac was flooded.

The Kolubara River changed its course on May 17 and flooded the open pit mine in Lazarevac.