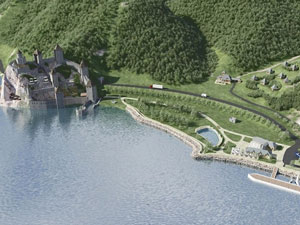 future look of Golubac Fortress
An agreement on the renovation of Golubac Fortress, for which the EU set aside EUR 6.6 million, was signed today by Acting Economy Minister Igor Mirovic and Minister of European Integrations Branko Ruzic, so these renovation works could start as early as June.
The agreement was also signed by Martin Ledolter, the general manager of the Austrian Development Agency, Golubac Mayor Zoran Pajkic and Iskra Maksimovic, the acting director of Tvrdjava Golubacki Grad.

Mirovic said in the Serbian government that the contractor would be selected by tender in late May or early June, adding that the works would be completed in 2016.