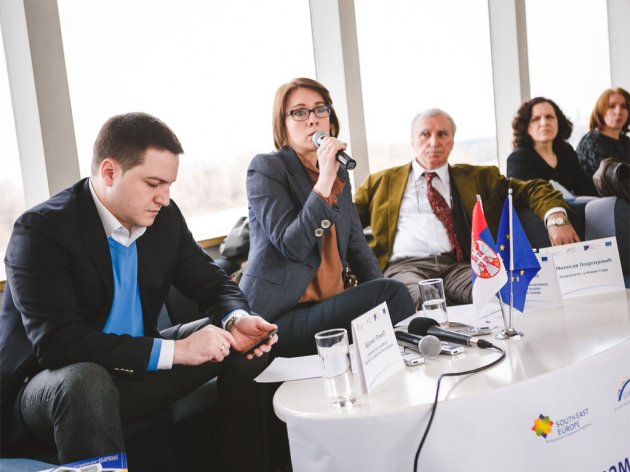 Serbia is a part of Europe in geopolitical, sociological, cultural and any other way, Branko Ruzic, the minister without portfolio in charge of the European integration said at the workshop for journalists, whose topic was the South East Europe Transnational Cooperation Programme. During the workshop, the participants had an opportunity to become familiar with the achieved results under this programme as well as with its importance for the process of territorial, economic and social integration.

- The final effect of such projects is that apart from social benefits, practical implementation of cross-border cooperation also generates profit. The EU has been recognized here, its values are being accepted and spread – Ruzic pointed out.

The workshop continued with an address by Assistant Manager of the EU Integration Office Sanda Simic, who mentioned that in the period 2007-2013, Serbia had participated in eight transnational and cross-border programmes under which more than 600 projects had been implemented in the entire territory of our country.

- It is not an easy thing to write a project – Simic added and pointed out that the European Integration Office organized workshops to train people on how to write and implement projects.

The sites which provide information on these workshops are www.seio.gov.rs and www.evropa.gov.rs, she pointed out and added that it was necessary to stick to strict EU regulations when writing a project.

The South East Europe Programme is one of the most diverse and complex fields of transnational cooperation in the old continent. The programme covers 16 countries (Serbia, Austria, Greece, Italy, Bosnia and Herzegovina, Bulgaria, Croatia, Moldova, Hungary, Montenegro, Albania, Slovakia, Slovenia, Ukraine, and Macedonia). It promotes a better regional cooperation between the participant countries, which contributes to stability, progress and safety across the region.

Cross-border and transnational cooperation programmes provide support to institutions and organizations in the border areas of neighboring countries with the aim of promoting cooperation, resolving mutual challenges and improving the living standard in underdeveloped and inaccessible areas.

In the first stage of the programme implementation, project partners from Serbia had over EUR 2.5 million at their disposal, while in the second stage of implementation, IPA allocations for all countries that use IPA combined totaled EUR 16.5 million.