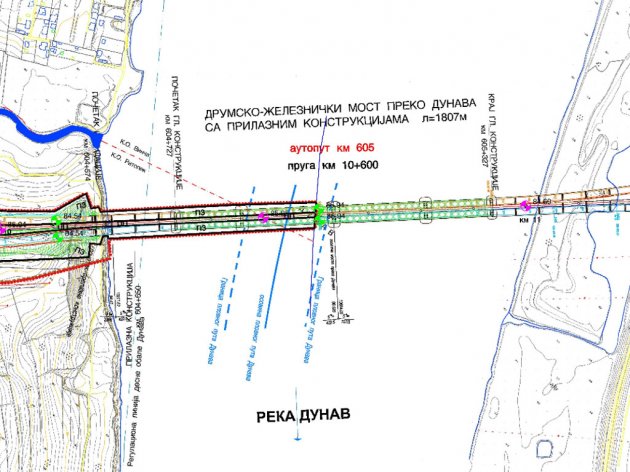 Construction of the freight railroad bypass Beli Potok-Vinca-Pancevo and the highway bypass Bubanj Potok-Vinca-Pancevo will cost about EUR 96 million and around EUR 205 million, respectively, whereas a road and railroad bridge across the Danube requires an investment of about EUR 129 million, Miodrag Poledica, state secretary in the Transportation Ministry, told eKapija.

- The total construction value of this project is about EUR 430 million, whereas the investment value of construction and designing, with all indirect expenses that include conditions and consents, administrative taxes, permits and expert supervision, totals approximately EUR 470 milllion - said Poledica.

General and preliminary designs and environmental impact assessments are already done for all aforementioned facilities. Preparation of the documentation and plans in 2007 and 2008 was financed by the Ministry of Infrastructure and the City of Belgrade, and all documents were prepared by the CIP Institute of Transportation.

Poledica says that the estimated time to finish the construction is close to three years.

- These facilities are of huge importance for the City of Belgrade and the rest of Serbia, as well as for the Belgrade on Water project which demands the relocation of freight rail traffic from the Sava amphitheater to the new railroad through Vinca. Companies from many different countries have already expressed interest in building and financing these traffic facilities.

As the media were told by Milutin Ignjatovic, the CEO of CIP Institute of Transportation, the bridge near Vinca will be one of the longest and widest bridges in Belgrade given that it will have three traffic lanes on both sides of the road and railway tracks running between them.

More information on the future traffic corridor can be found HERE.