SERTIC: Cancellation of custom fees will not disturb the market 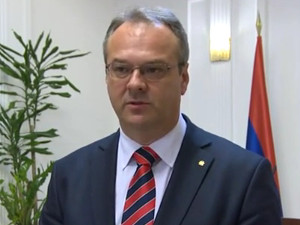 Zeljko Sertic (Photo: YouTube)
The President of the Serbian Chamber of Commerce (PKS), Zeljko Sertic, doesn`t expect changes on the Serbian market due to cancellation of custom fees starting from January, 1, 2014, as part of liberalization according to the Agreement on stabilization and joining the EU.

- It is good that export from Serbia to EU and international trade exchange with EU is significantly bigger than before. We have very capable companies that can deal with competition on the market, said Sertic in an interview for Tanjug.

He estimated that cancellation of custom fees is not a sudden change, as the fees have been decreased gradually, and the entire process must be considered in the context of obligations Serbia has in the joining procedure to EU.

Sertic reminded that from January, 1, 2014, custom fees for majority of products will be annulled, except for around 400 most important products from agricultural and food industry.

Because of that, Sertic mentions that it is of high importance to educate the business world, to increase the potential and promote knowledge and management, in order to increase the competitiveness of domestic goods, thus domestic manufacturers can be more competent on EU market.