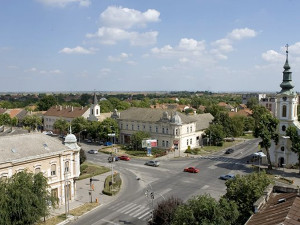 At the annual media conference organized by the president of the Stara Pazova municipality, Djordje Radinovic and the director of the Directorate for construction, general overview of the year behind, current results of municipal administration and the most important implemented investments were presented.

Both domestic companies contributed a lot to this, especially trade chain Medius which has just opened a new retail outlet in Vojka.

- Among other important projects and investments which we start, I have to mention a very demanding process of sewerage network construction at the overall municipal territory. In order to find the most adequate solution in technological and technical sense for this huge project, we have been negotiating with more foreign partners for this public-private partnership model. We are negotiating with three different top companies in this business and a German company whose managers have already done forecast which implies this project would cost some EUR 35 mil, showed a special interest. The second important project is a replacement of public lightning with new LED technology which will significantly save current consumption and maintenance costs. According to data collected after installation of test bulbs, we calculated that annual savings would total up to 70%. Apart from that, the Feasibility study project of waste water managements is due in a couple of years which would solve the waste issue in Stara Pazova in a couple of years – President Radinovic pointed out this fact among other things.

Director of the Directorate, Nedeljko Kovacevic, spoke about capital and current infrastructure projects.

- We featured the year behind us with the great engagement and implementation of very important projects mostly in cooperation with the president of the municipality and municipal management. When it comes to investments, the Directorate for the construction of town, as of July 2012, for both large and small projects and procurements, had a total of RSD 204 million (VAT included) and in 2013, we had RSD 443 million (VAT included) of total investments – the director of the Directorate for construction, pointing out more important data and then those who refer to plans for 2014.

Capital Investments for 2013 are construction of the kindergarten in Novi Banovci, maintenance of the Stari Banovci center, adaptation of health centers in all settlements except from Nova and Stara Pazova which was left for the upcoming period. Adaptation in schools on the territory of the whole municipality, sports courts, and maintenance of the chapel in Surduk and the construction of a new chapel in Belegis are extremely important as well. Only Krnjesevci do not have this kind of facility so far because the construction is due next year.

Depending on available assets, priority streets were asphalted in all municipal settlements, adaptation of the city pool was carried out, a part of sewerage system in Nova Pazova was done, wild landfills were cleaned and a lot of time was set aside for preparation of detailed regulation plans for all places which are undergoing infrastructure equipping in industrial zones which is very important for potential investors and businessmen. Apart from that, works were carried out on all church facilities, firstly on churches in all settlements of the Municipality. The project of development of the Slovakian- Evangelist church in Stara Pazova and the old parochial house was especially important.