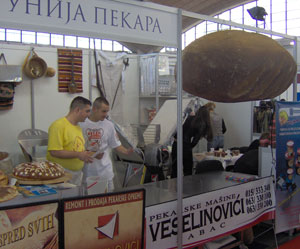 The 5th entrepreneurial fair "Business Base" was opened today (November 29, 2006) under the cupolas of the Belgrade Fair. About 250 exhibitors from REpublic of Serbia and the region took part in it.

Speaking to the present at the opening of that exhibit, general manager of the Belgrade Fair, Anđelko Trpković, expressed hope that the 5th Entrepreneurial Fair will be more successful than all previous fairs, as well as that all participants will have some concrete benefit from the participation in that manifestation.

- This-year gathering is another confirmation that we can do together the things that others don't believe we can. In the name of the Belgrade Fair, I promise that we will be good hosts and that we will meet again next year in even bigger number – Trpković pointed out.

The manager of the SME Development Agency of Serbia, Mirjana Jovanović, said that the Fair would include three program units and that the education and expert tribunes would be some of its most important segments. She also pointed to the importance of this-year gathering, as well as to significance of the SME sector in Serbia at the moment.

Similar message was directed by the State Secretary in the Ministry of Economy, Zora Simović, who pointed to the contributions of the Government of Serbia to the strengthening of the aforementioned sector in the country, adding that such practice would be continued in the future.

- The number of newly founded small and mid-sized enterprises in Serbia constantly grows. Thanks to that sector, about 60,000 people were employed in 2005 and we expect that that number will be surpassed this year - Simović pointed out.

According to earlier announcements, numerous institutions that deal with the development of entrepreneurship will participate in Fair "Business Base", which will last until December 2. Also, the Ministry of Labour, Employment and Social Policy and the National Employment Agency will represent their projects for development of SME sector.

In the scope of numerous presentations, the newly founded Japanese Agency for International Cooperation in Serbia, credit line of the Italian Government and project "Contest for the best business plan" will be represented.

The team of "Ekapija", as many times before, will be on site, ready to hear any important investment story.