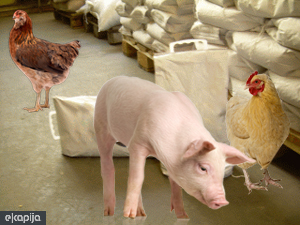 Dutch Royal Agrifirm Group, one of the largest fodder manufacturers in Europe, acquired 35 percent of the local company Sto Posto on Tuesday, and now plans to invest EUR 30 million in it over the next three years.

A specialized company within Agrifirm, Nuscience, simultaneously became a majority owner of the local manufacturer of vitamin and mineral mixtures for animal feeding, the Novi Mix company, acquiring a 51-stake in the company.

An agreement on this acquisition, whose value is kept a business secret, was signed Tuesday in the presence of Serbian President Tomislav Nikolic in the Serbian Chamber of Commerce.

- We are leaders in the market of the Netherlands, and we want to strengthen our position not only in our country, but also outside Holland - Loman said and added that the company planned on using the same successful business model it had already developed in Poland, Hungary and Ukraine in Serbia.

He stressed that they had picked Serbia as the investment destination because it had an excellent potential in the agricultural sector, underlining that the Sto Posto company was a partner on a high professional level.

Only logged-in users can comment.
Latest
Most read
Emmepi Textile Facility in Kikinda Closes After 13 Years – Sixty Workers Lose Jobs 15.01.2021.
New Set of Measures for Economy and Citizens May Include Unemployment Aid 15.01.2021.
MATIC: Rebranding Serbia as a tourist destination a priority, spas as new sites of attraction 15.01.2021.
Tender for Contractor for Serbia-Bulgaria Interconnector Between January 20 and 25 15.01.2021.
Construction of Luxury Ski Complex Omorika to Start in April on Kopaonik – Apartment Hotel and Alpine-style Villas with Separate Ski Shops and Mini Spa Centers 14.01.2021.
Tender for Contractor for Serbia-Bulgaria Interconnector Between January 20 and 25 15.01.2021.
New Singidunum to be raised in Dobanovci – Industrial park, residential-office center, kindergartens, school, clinic and other features planned on 220 ha 06.11.2019.
Luxury Complex of Villas With Spa Center Under Construction Near Belgrade – Avalske Doline to be Completed in 2021 03.09.2020.
Weather
Weather forecast