How kind are Serbian salesmen? 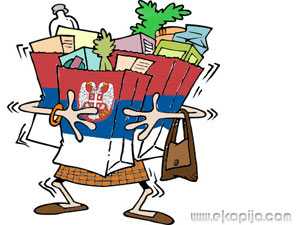 The research of the Croatian Heraklea, covering the six countries of the former Yugoslavia proved that salesmen in Serbia are the ones who are the best at taking into consideration customers’ needs. However, citizens are not satisfied with other characteristics of an average Serbian salesman.

It is important that a customer feels well and dignified, no matter how much he or she is planning to spend so that the encounter between a seller and a customer would not be the last one.

Those salesmen who think of sales as their temporary solution until they find a desired position, as a rule, are dissatisfied and disinterested in customers’ needs. They do know the basic commercial lessons about kind approach and providing information about a product, protectors of consumers say. Therefore, they claim, Serbia has no merchants, only sellers.

- We used to have schools for merchants which lasted for two years. Of course, it was not the university, but the people were educated, especially those who were selling technique appliances, textiles and food so a consumer knew at any moment how to turn to and get an information from a merchant. Unfortunately, we do not have it today – Vera Vida from the Center for Consumers’ Protection says.

They are suggesting introduction of such a training which is inevitable in sales. Researching the market pulse is also essential.

Martin Petrovic from the PR Department in Delhaize says the Serbian market is specific because of its high inflation and a large number of the retired and because consumers got used to credi their purchases.

It would be better if larger number of competitors tailored their offer, not decline in citizens’ purchasing power, a journalist of Politika’s Consumer section estimates.

- We have a large Serbian merchant, big store chain facing a slight drop in sales, but not so drastic; which does not a reason to worry because big world competition has not arrived. On the other hand, we have small traders really hit by turnover decline, which are very severely endangered by competition of large chains and who have more problems and are trying to satisfy consumers - Stefan Despotovic says.

Neither affordable prices, discounts, promotions or presents, succeeded in changing the profile of an average Serbian customer who goes shopping with a list, pays attention mostly to prices, likes well-known brands, but is more and more replacing them with other, less expensive.