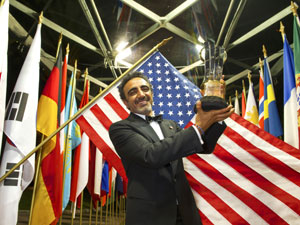 Hamdi Ulukaya, the founder, president and CEO of Chobani, based in the United States, was last night named the Ernst & Young World Entrepreneur Of The Year 2013 at an awards ceremony held in Monte Carlo’s Salle des Etoiles. Hamdi was picked from among the 49 country finalists vying for the title across 47 countries, each of whom had already been named the Ernst & Young Entrepreneur Of The Year in their home countries.

Turkish-born Hamdi Ulukaya founded Chobani in upstate New York in 2005 and launched Chobani Greek Yogurt two years later. Less than six years after launch it is the best-selling yogurt brand in the US with annual sales approaching US$1bn. Chobani has 3,000 employees and operates the largest yogurt factory in the world selling its products to Australia and UK as well as the US.

This year Serbia had its representative at this prestigious contest for the first time ever. It was Darko Budec, the founder and president of the Buck company from Belgrade.

- I believe that it is excellent for Serbia to take part in this contest. Everybody expressed a great interest in entrepreneurship and business climate in our country. We also established few direct contacts - says Darko Budec. 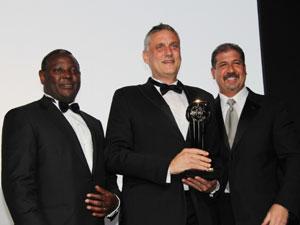 Darko Budec at the ceremony in Monte Carlo

During his stay in Monte Carlo, the president of Buck was interviewed by journalists from a number of media companies, including Financial Times, Wall Street Journal, CNBC, as well as those from Slovakia, Romania, New Zealand...

- Over the past 26 years entrepreneurs have done more than any other group to stimulate innovation, job creation and prosperity during both periods of growth and in more challenging economic conditions. Hamdi epitomizes the vision and determination that set entrepreneurs apart and is very worthy of the title Ernst & Young World Entrepreneur Of The Year 2013.