Another temple of science in Serbia is coming. As eKapija finds out in the Project Management Unit, after yesterday's signing of the contract, the construction of Kragujevac-based Centre of Excellence, the Center for stem cells being a part of it, should start in early 2014!

The deadline for completion of facilities is two years, the selection of contractors will follow soon.

Also, as we find out in the PMU, scientists will not have to worry about housing since the construction of housing for young researchers should begin in the next construction season. For a lot northwest of the urban area, a location permit was obtained, and development of the conceptual design is in progress, our interlocutors say.

Center of Excellence to occupy some 1.7 acres

The Kragujevac-based Center of Excellence, a part of the "Research and development in the public sector" will be important for physicians, but also for physicists, chemists, researchers in the field of materials science and nano sciences, agriculture and food, information and communication technologies, etc. 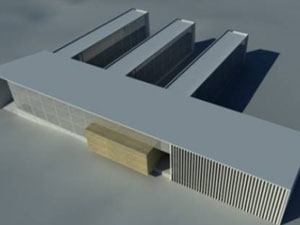 Future look of the Center for stem cells in Kragujevac

The Center for stem cell will, as a research institution, operate as a part of the Medical Faculty in Kragujevac. As PMU announced, it will have four separate units - teaching units, research space, vivarium and stem cells bank.

The Center for stem will be included in the educational program and the program of regenerative medicine, oriented to research of stem cells and their treatment purpose, which is one of the priorities of the Strategy of Scientific and Technological Development of Serbia in the period from 2010 to 2015.

The total value construction and equipping value for the Center of Excellence of the University of Kragujevac totals about EUR 20 mil.

The facility of 11,500 m2 will be built on a lot of 1.7 hectares of some EUR 6 mil, provided by city of Kragujevac, and with the European Investment Bank loan of EUR 14 mil, between the Clinical Center and the University. Funds for the state of the art laboratory equipment have also been set aside.

According to PMU, the City of Kragujevac is obliged to fund land development compensation.

- After the Study of equipment, as well as after the completion of the Technology project and preliminary design the requirements of the University of Kragujevac, the complete appearance of the building will be finished so the public will be able to see the first "pictures" of the future Centre for Stem Cells - PMU announces.

Young researchers to get 200 flats

Housing for young researchers in Kragujevac is actually a sub project within the "Research and Development in the Public Sector."

- The construction of the complex has a great social importance, not only for the University of Kragujevac, but for the whole city and the whole of Serbia – PMU interlocutors say.

Residential complex for young researchers will be placed on the lot between the Susicki potok and Kragujevac Memorial Park. The plan is to construct 210 flats here (100 one-room, 70 one-room with studios and 40 three-bedroom) in four sections. The total area of buildings is 10,000 square meters, and the building will have six stores maximum.

The contract on the construction of the Center of Excellence was signed May 21 in Kragujevac, at the University Day ceremony, by Professor .dr. Zarko Obradovic, Minister of Education, Science and Technological Development, Professor Dr. Aleksandar Simonovic, Project Management Unit Manager, Professor Slobodan Arsenijevic, Rector of the University of Kragujevac, Veroljub Stevanovic, Mayor of Kragujevac.