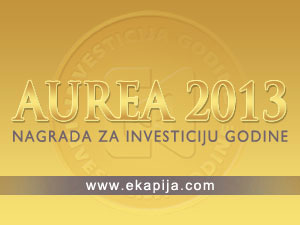 In late March 2013 the business web portal eKapija will present the Aurea Investment of the Year Award for the fifth consecutive year. Visitors of the web portal aurea.rs can vote for their favorites online as of today.

There are eight projects that are shortlisted for this year's award, as they best meet the following three criteria: innovation, social utility and financial potential. This year's finalists are as follows:

Carlsberg – Supercompost – Innovative use of waste

Visitors of the official web page of the Aurea Award will be able to cast their votes by March 18th, and the final decision on who wins the 2013 Aurea will be made by an expert and unbiased jury. Members of this year's jury are as follows: Foreign Investors Council (FIC) Executive Director Ana Firtel, Innovation Fund Director Dr. Ljiljana Kundakovic, Director of the Institute of Economic Sciences Dr. Dejan Eric, SGS Beograd CEO Marinko Ukropina, Chairman of the Basler Osiguranje Managing Board Vladimir Medan, and World Bank Regional Project Manager Oliver Orton.

On the occasion of the expiration of the nomination period and the beginning of the voting stage, eKapija CEO Zdravko Loncar said the following:

- This year the Aurea Award celebrates its first small jubilee - the fifth anniversary. It is a pleasure to see that the interest in participation in this competition has been growing bigger every year, and I am particularly glad that we've received so many interesting nominations for this year's award, despite the crisis. That clearly shows that investments in innovative projects are always in the spotlight, regardless of the economic climate in the country and the region.

- We are very glad that eight innovative projects have been shortlisted for this year's Aurea Award, which proves that even in precarious economic times, there are companies in Serbia that are ready to commit themselves to innovations and decide to invest in them. When we accepted eKapija's invitation for partnership, aside from providing support to quality ideas, we wanted to prove in one more way that the M&I Systems, Co. Group appreciates the initiative, originality and aspiration of companies to create a new value in their operations and make a contribution to the community. We hope that this year's finalists will get the deserved attention from their respective industries as well as the entire business environment, thus becoming an example of good practice for their colleagues to follow - said Dragoljub Prijic, director of Global Services at the M&I Systems, Co. Group.

In addition to the main award, eKapija will also present two special awards: for the best innovation and for the best social utility.

Which of this year's finalists will win the prestigious investment of the year award will be known on March 27th.