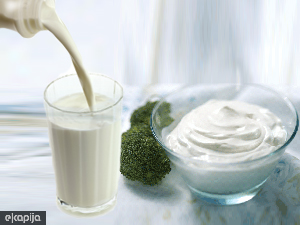 Imlek yesterday launched a range of organic milk products, which are unique not only in Serbia, but also in the region.

As of 5 February 2013, stores across the country offer organic milk, yogurt, sour cream and cheese under the common name Bello Organic, and the prices of these products will be 20 to 30 percent higher than those of classical dairy products.

Imlek CEO Slobodan Petrovic pointed out that it was not a fraud of any kind but reality in Serbia, underlining that the products were made of organic milk from Curug-based organic farm Velvet Farma.

- At this moment, we receive 17,000 liters of organic milk per day from this farm, and the entire batch will be used to make organic products - Petrovic told the press.

- Part of the production will be exported - to Romania, Hungary, Austria and Slovenia, and the plan is to increase daily supplies to more than 20,000 liters by the New Year - he said.

He stressed that Imlek was paying manufacturers a 30 percent higher price for organic milk than for regular raw milk, that is, eight euro cents more per liter, adding that the "purchase price of regular milk ranges between 36 and 38 dinars per liter."

Imlek Marketing Director Srdjan Popovic announced that the next step would be to launch organic chocolate milk, fruit yogurt and spreadable cheese.