We present you the most interesting projects in the field of SHOPPING CENTERS.

Judging by the interest expressed by eKapija readers, there is no crisis for traders. Our salary may be small, food prices and other expenses may be high, but we still love to spend - just love it. Therefore, words 'shopping center,' 'shopping' and 'outlet' are among those having some kind of magical appeal in our country. And we particularly love foreigners. Just like last year, our interest in market chains Lidl, Ikea, Delhaize and others is not declining at all. But what should make us happy is that big players are not focused only on Belgrade any more. When it comes to shopping centers that are opened or are in the pipeline, citizens of Jagodina, Kragujevac, Novi Sad, Subotica will no longer have to head for the capital city in order to buy themselves clothes or appliances. Decentralization at work that even precedes the political one.

The first-ranked project on our Retrospective list, a shopping center of the Israeli company Big CEE Srbija, shows just how fond we are of foreign capital. The first phase of this project in Novi Sad, in which about EUR 50 million were invested, saw the construction of a 10,000 square meter retail park that brought a number of global brands to Vojvodina, including C&A, Deichmann, Takko Fashion, Tref Sport, Big Bang, NewYorker and Home Center. The second phase in the spring 2013 will see the opening of a complex and shopping mall spanning 30,000 square meters, where many new global and domestic brands will be available as well as various entertainment facilities for both children and adults.

The second-ranked story is an announcement of the arrival of the German giant, Lidl, which has so far bought a land in Novi Sad, Nis, Subotica, Zrenjanin and Valjevo. It is still unknown which locations this discount market chain plans to occupy in Belgrade, but judging by announcements, it is more and more likely that Lidl's operations in Serbia will change the distribution of power in the retail market.

The first large outlet in Serbia ranks third on the list. The long-awaited Fashion Park Outlet Center opened its doors on April 19th, offering visitors 15,000 square meters of retail space featuring 65 stores of famous international brands, where clothing, footwear and accessories can be bought at a discount of 30 to 70 percent during the whole year. The investor is BlackOak Developments, the financial institution that backed the project is UniCredit Bank, and the operator is the British GVA Outlets, one of Europe's top outlet operators.

That we are eager for innovation when it comes to shopping centers is shown by our readers' interest in the project ranking fourth - a shopping center featuring a football stadium on its roof. The Stadion shopping center in Vozdovac, worth EUR 50 million, is expected to open in the spring 2013 and secure 800 new jobs, the project investor, Krammer&Wagner&Illmaier, announced in a release. 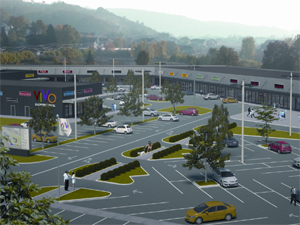 The fifth-ranked project is Vivo Shopping Park in Jagodina. According to announcements, a 10,000 sqm building featuring 33 retail stores and 360 parking places will be built on a land lot spanning 25,000 square meters. The value of this complex is EUR 15 million, and its opening is scheduled for 31 March 2013.

If we are to choose one investment comparable to Godot, then it would definitely be the long-awaited arrival of IKEA market chain, which ranks sixth on our list. Swedes announced the opening of five department stores, and although their construction is still on standby, people at IKEA have denied that they gave up their investment in Serbia.

The seventh-ranked story is the one about the Israeli company Plaza Centres, which opened its first shopping and entertainment center in Serbia in Kragujevac on March 20th, and invested over EUR 60 million in it. As it was announced by Plaza Centers Serbia Director Sagiva Megera, this 65,000 sqm complex featuring 110 stores should employ between 500 and 700 workers.

Our readers were no less interested in the new look of Mercator Shopping Center in New Belgrade, which ranks eighth on the list. After four months of renovation, Mercator SC reopened its doors on September 1st. The Slovenian company invested EUR 12 million in the reconstruction of its facility in New Belgrade, which introduced many new brands, some of which were completely new to consumers in Serbia.

Belgium's market chain Delhaize is still on the list, but it now ranks as low as ninth. Namely, Belgians announced the construction of a distribution center on a 20-hectare land in Stara Pazova. However, construction of this complex, which should employ at least 750 workers, is postponed for the beginning of this year.

The tenth-ranked story is Delta Real Estate's announcement of the construction of the largest shopping center in Serbia. About EUR 200 million should be invested in Delta Planet at Autokomanda in Belgrade, whose construction is announced to start in 2013, when this company expects to receive a building permit.

The projects ranking eleventh through fifteenth on eKapija's list are the following: Quinterra Retail Park in Subotica, Roda Center in Krusevac, which opened August 16th, Metro Cash&Carry, which started the construction of a HORECA center in the Vidikovac neighborhood in Belgrade, the Nordic B-Hyper hypermarket, and an announcement that Kragujevac is going to get another shopping center in the Stanovo neighborhood, whose construction is announced by Austria's Supernova.

Take a look at the complete rank list of investments in the category of SHOPPING CENTERS and compare it with your own opinions, expectations and assessments.

One more thing - have you already read which projects attracted your greatest attention in the categories of AGRICULTURE AND FOOD INDUSTRY, REAL ESTATE, INDUSTRY, TOURISM, ENTERTAINMENT AND RECREATION, TELECOMMUNICATIONS AND IT, TRANSPORTATION and HEALTH CARE.