We present you the most interesting projects in the category of REAL ESTATE.

Although the deadline for moving in and the quality of construction raised much discussion, so-called "the largest building site" in our country got its first tenants in 2012. The story about Vozdovac's neighborhood Stepa Stepanovic is also the focus of interest of eKapija users for the third year in a row.

The role of an investor, which the state has taken by financing the construction of apartments in Stepa Stepanovic and New Belgrade's neighborhood Dr Ivan Ribar, will cease although it has stimulated demand for subsidized loans. Despite the crisis in the construction sector, the British company Pluto Capital started the construction of another residential facility late last year, when the work on complexes Dunavske Terase and Living Good was nearing completion.

Most of the high-rise building projects are still located in the capital city and its surroundings, but our list also includes several projects in the provinces, such as multifunctional complexes in Nis, Smederevo, Sabac, Jagodina, and their implementation is expected to start in 2013.

Numerous unrealistic ideas usually pop up in an election year, so it is not a surprise that the mythical story of "Serbia's Manhattan" was resurrected by politicians in 2012 and that it attracted a great attention of our readers.

The Stepa Stepanovic neighborhood is on the top of our list for 2012. In 2011, when the first 1,000 apartments in this complex were sold, this project ranked fifth. In 2010, when the site preparation work and the sale of apartments began, the story about this project ranked first. As it was announced by the City Construction Directorate, all apartments in this neighborhood should be occupied by July 2013, so that much new information is expected this year as well, especially because of the announced construction of infrastructure, kindergartens, schools and other facilities necessary for such big neighborhood of 20,000 people.

The Bubanjski Heroji complex in Nis was even more interesting to our readers in 2012 than in 2011, which is why this planned investment of the US company Clean Earth Capital climbed from third to second place on the Retrospective list. 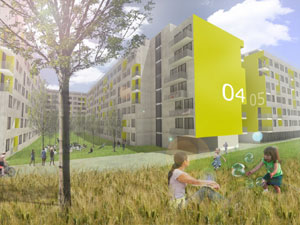 The first phase of this investment worth EUR 85 million should start in early 2013 with the tearing down of old facilities in that location, followed by infrastructure works. The project involves the construction of apartments for civilians and retired members of the Army of Serbia, city hall, shopping center, hotel, private medical institution, US technical university, and an open art center where various forms of applied arts will be presented.

The third-ranked investment is another large residential development project. It is New Belgrade's neighborhood Dr Ivan Ribar, whose construction commenced in April 2012. The latest news on this complex, which is a responsibility of the Construction Directorate of Serbia, is that people have already bought 190 out of the total of 707 apartments to be built by the year's end. The price per square meter, inclusive of VAT, amounts to EUR 1,290.

The fourth-ranked investment in this category is a luxury tourist complex, worth EUR 200 million, which should be built in one of the most beautiful parts of the capital, at the foot of the Belgrade fortress. The information that the complex will be designed by a famous architect, Zaha Hadid, is what drew the attention of the public. 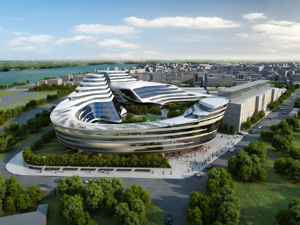 luxury complex at the foot of the Belgrade fortress

Lamda Development has provided a location for this complex back in 2007, for which it paid EUR 55.8 million. Whether this complex is going to become a new symbol of Belgrade depends on the solution to the problem with administration that emerged after the acquisition of Beko factory in bankruptcy. People at Lamda Development claim to be the only owners and managers of the project, but they cannot specify when the construction of this complex will start.

The fifth-ranked project is last year's winner - West 65. Construction of the first phase of this complex in New Belgrade's Block 65, in which PSP Farman invested more than EUR 160 million, commenced in June 2011. As it was announced by that company, the first apartments should be ready for tenants in February or March 2013. Construction should be resumed this year, so that this residential and business complex may make it on the list of the most popular stories about real estates in 2013 too.

The seventh-ranked investment on our list is another business building, that is, a facility of a bank in Nis. As people at ProCredit announced, an energy-efficient building worth EUR 1.2 million should be soon erected in the city on the Nisava River. ProCredit Bank's new business building in Nis will be saving 70 percent on heating and cooling costs and emitting 40 percent less carbon-dioxide than buildings using classical venting, heating and lighting systems.

A number of eKapija readers got interested in the story of "Serbia's Manhattan" and the project that is already mythical in nature, so that the idea of the capital's expansion to the river banks ranks eighth. It's been stressed for decades that the area occupied by the railway and bus stations represents the most attractive part of the city and should become the main place for life and work in Belgrade. However, steps towards the relocation of stations are taken very slowly, so that new facilities in the Sava Amphitheater AKA Town on Water AKA Europolis can be expected in about 25 years.

An investment of Belgrade-based Aramont - the residential and business complex Dunavske Terase that is under construction in the vicinity of our largest river, ranks ninth on our list. This complex will include 270 apartments, 162 business suites and 54 studios.

The next on the list, in the tenth place, is another residential and business building situated few minutes away from the Cubura Park in Belgrade. Once completed, Harmony Apartments will offer the total of 80 apartments ranging in size between 34 and 147 square meters. Its completion is expected in late 2013. As the investor announced, the process of selecting a new location for another complex is now underway.

The fifteenth-ranked investment is another project in Vracar, Belgrade - 28 Living Good apartments.

Take a look at the complete rank list of 20 investments in the category of REAL ESTATE and compare it with your own opinions, expectations and assessments.

One more thing - have you already read which projects attracted your greatest attention in the category of AGRICULTURE AND FOOD INDUSTRY.