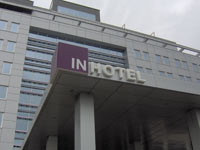 Starting yesterday (August 21, 2006), the first business hotel in Belgrade – "IN Hotel", of which construction in Novi Beograd's Block 26 started few years ago and in which 20m EUR have been invested, was officially put into operation and it opened its doors to all interested guests, tourists and business people. 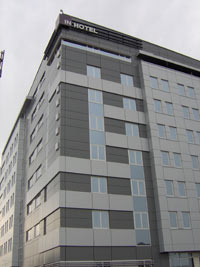 Speaking about details of the project, the owner of the aforementioned hotel, Greek businessman Hristoforos Petris, expressed huge satisfaction at the yesterday's press conference with te fact that the entire job has been finished successfuly and he invited all investors to follow his example and to start to invest in Serbia and Belgrade.

- The laws, as well as entire business milieu in Serbia, are now very favorable for large investments. Just because of that, I intend to move into Belgrade and to start investing in some other fields of work – Petris pointed out.

The deputy of the Mayor of Belgrade, Radmila Hrustanović, one more time greeted opening of "IN Hotel", saying that the opening of such building is of the extreme importance to Belgrade in which the last high-category hotel was built 17 years ago. According to her words, "IN Hotel" is happy to be on such attractive location, in the vicinity of the "Belgrade Arena", while it is only few kilometers away from Belgrade's downtown and airport in Surčin.

- Until recently, one of the biggest problems of Serbian tourism has been low quality of hotel accommodation. However, lately, that situation has been improving and Belgrade and Serbia started to get new and very luxurious hotels - Minister of Tourism, Bojan Dimitrijević, pointed out at the yesterday's meeting, adding that Belgrade needs at least ten more hotels of high category, which would all operate very successfully.

Dimitrijević pointed out that the hotel-keeping business in Belgrade had become very profitable, since the annual incomes from foreign tourists in Serbia grew at rate of 15 to 25%. Besides, the Minister said that there were 41 hotels in Belgrade at the moment, only four of which had five stars.

- So far, total of 80 hotel-keeping companies have been privatized in Serbia, whereas another 56 hotels are in the privatization process. Belgrade-based hotels "Slavija" and "Intercontinental" will be privatized by the end of year 2006 - Dimitrijević explained.

According to the words of the manager of newly opened "IN Hotel", Ružica Petrović Dedijer, that facility has the category of four "high" stars and total of 187 rooms, 28 of which are luxurious suites and 3 are the rooms for disabled persons.

The hotel owns underground garage with 64 parking places, as well as parking lot for 100 vehicles in front of the the main entrance. The facility has seven floors, three conference halls, modern business center, as well as gym, gift store and beauty shop.

Construction of hotel was entrusted to company "Napred", whereas the entire project was financed by company "North Gate". 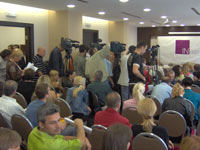 Yesterday's ceremony in "IN Hotel" took place in presence of creditor Nikos Marudas, councillor in economic department of the Embassy of Greece to Belgrade, Jagis Stijanos, the President of Chamber of Commerce of Serbia, Slobodan Milosavljević, the manager of Tourism Organization of Belgrade, Olivera Lazović, as well as many other guests.