Construction of an international port in Apatin is a precondition for the arrival of many investors in Serbia. Among the numerous companies that see a chance for themselves in that project are also those from the international cluster Future, which presented its members in the construction industry at a recent conference in the Embassy of the Republic of Hungary.

- Futura is an international business development cluster formed last year with the aim of overcoming the deficiencies in the work of expert clusters - Zoltan Szaroszy, executive president of Futura Cluster, said on that occasion.

The total of 38 companies from Hungary, Ukraine, Slovakia, Serbia operating in different industries are gathered in this association for the sake of cooperation. All of them are ready to expand their businesses, and their only means of communication with the domestic market at the moment is through this cluster. Futura members are very interested not only in the RTC Apatin construction project, but also in other interesting projects in this market. If they manage to establish a cooperation, they are also willing to open an office on the territory of our country, said people at Futura.

Aside from the fact that it is located on the border of Serbia, Croatia and Hungary, Apatin is also particularly appealing to Hungarian construction companies in this cluster because of the Danube River.

- Ferobetton is a company from Dunaujvaros whose concrete structures can be up to 44 meters long, so that ships are the most cost-effective means of transportation for these products - says Gabor Dubrovski, deputy director general of Ferrobeton.

By the way, Ferrobeton has been producing reinforced concrete, roof structures, beams for concrete bridges and other concrete structures for as many as 57 years now. This company is a leader in the Hungarian bridge construction market because its products account for 80 percent of the building material used in the construction of bridges and around 40 percent of the material used in high-rise building in this country. Since 2008, this company has been operating as part of the CRH group, which is a global leader in the production of building materials and has the annual turnover of EUR 20 billion. Ferrobeton is a CRH representative for central and eastern Europe.

- We are interested in finding partners in Serbia to be general contractors and to independently participate in tenders for various construction projects, while we as an expert company could join the implementation as subcontractors - dodaje Dubrovski.

This company is interested in the project in Apatin as well as in high-rise building projects in Serbia like, for example, construction of shopping centers or production facilities.

Iduman, a manufacturer of cranes and steel structures, exists since 2004. The company's annual revenue amounts to USD 3 million and it produces four to five cranes every month. It is a significant share if we know that Hungary produces the total of about 100 cranes per year. Iduman has a factory in Hungary and exports products to all continents. The cranes made by this company can be found in almost all ports around the world, and they are especially proud of their exports to Egypt and the USA.

Iduman could partake in port construction in Apatin, where mobile cranes are necessary, as a subcontractor. There is also possibility of them taking part in the construction of an industrial park, that is, factories and production facilities in that location. People at this company say that they would like to participate in other projects as well in order to expand their business to the Serbian market.

Zoltan Molnar, the owner of Iduman, says to eKapija that regardless of whether the company will take part in the construction of the port or factories in Apatin, it will definitely open a branch office in Serbia in Q1 2013. 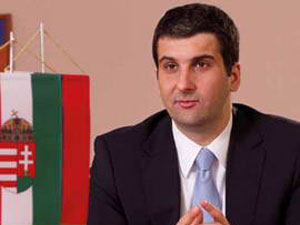 Futura Cluster has also signed a cooperation agreement with E.S.E. Cluster, which was founded in Backa Topola two years ago.

- We strive to unite local and regional capacities so we could participate together in environmental projects. We are a kind of a regional center for the exchange of knowledge and ideas, but we are also the mediators of cooperation in Serbia - says Endre Balasza, manager of the cluster.

As a public-private partnership, this cluster works on an elaborate to offer to local self-governments, which would make the cooperation easier.

- The construction industry is hit the most by the current crisis. However, these members of Futura Cluster have managed to overcome it and successfully operate, which makes them desirable cooperation partners - says Dusko Karagic, head of the Economic Office of the Hungarian embassy.