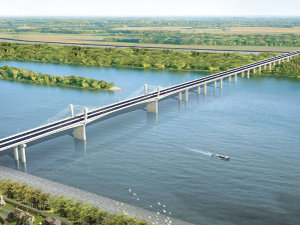 Serbian Prime Minister Ivica Dacic spoke on Monday (15 October 2012) with the delegation of China Communications Constructions Company about the progress of construction works on the Zemun-Borca Bridge.

Members of a delegation of this Chinese company, led by Executive Director Zhou Jichang, pointed out that their cooperation with Serbian partners was very good, voicing the belief that the Zemun-Borca Bridge would be finished on schedule and in line with the world's highest standards.

This company is also interested in partaking in the construction of Corridor XI and the bypass around Belgrade, it was said at the meeting that was also attended by Aleksandar Antic, president of the City Assembly of Belgrade.