The Belgrade business system Telefonija has adopted a reorganization plan that envisages a complete settlement of liabilities to over 1,000 creditors. The total amount of claims is close to EUR 18.5 million, most of which are debts to financial institutions.

- This is probably the fastest-adopted reorganization plan in Serbia - Vladimir Pavlovic, director of the consulting company WM Equity Partners that has made the reorganization plan and is in charge of monitoring its implementation, says to eKapija.

Namely, a reorganization plan prepared in advance for PS Telefonija AD was adopted at a hearing on 9 August 2012 at the Court of Commerce in Belgrade. The whole process lasted for somewhat less than two months. The plan was delivered to the Court on June 15th, and the Court passed a decision to commence the previous bankruptcy proceedings as early as June 20th.

Pavlovic says that it is also important to point out that 100 percent of class A1, A2 and D1 creditors voted for the plan, which was also adopted by class D2 creditors with 65 percent of votes in favor and only 4 votes against.

Aforementioned plan represents a combination of rehabilitation and liquidiation reorganization, meaning that a substantial portion of pledged assets will be sold, which will enable a quick settlement of debts to financial creditors. Creditors are divided into seven classes, and the liabilities to those belonging to three of them will be settled before the commencement of application of the plan.

The deadline to settle debts to banks is 1 December 2013.

- Telefonija has put its affiliate Beotel up for sale. The plan is to sell this company within a six-month period, which could be extended for additional six months. We expect Beotel to be sold by the year's end, given that three locally operating companies have already expressed their interest in acquiring it.

In that way, banks' claims of about EUR 15 million will be settled from the proceeds of the sale of Beotel, business building in Kumodraska Street in Belgrade, land lots in Cerska Street and Telefonija's gas infrastructure.

- The number of employees was significantly cut during the previous bankruptcy proceedings, so we do not expect a need for a new substantial downsizing - says Pavlovic. 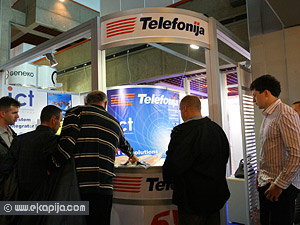 Branimir Boskovic, chairman of Telefonija's Supervisory Board, says to eKapija that he is extremely satisfied with the adopted plan. However, he adds that this would have never happened if various funds and public companies had settled their liabilities to Telefonija on time.

- After having its accounts frozen for few months, the reorganized company PS Telefonija AD Belgrade will again be able to tender for contracts and pay full attention to the development of its core activity, while its employees will continue to work in normal circumstances and accordingly create conditions to receive their deserved salaries on a regular basis - say people at Telefonija.

Boskovic stressed that he is very thankful to investors who believed in Telefonija in the previous period and did not immediately start terminating contracts. He as well believes that Beotel will be sold soon, given that it is a "very good company with a good infrastructure."

Let us remind that Telefonija's accounts have been frozen since March 28th, after a bank started a chain reaction that led to a freeze on the accounts of all affiliates of Telefonija in a very short time.

Telefonija then resumed its operations, held meetings with all major creditors and reached an agreement in principle on the way in which to remove the freeze from the accounts of the company and its affiliates.

This company is listed on the Belgrade Stock Exchange, and it also used to be a member of the Belex15 index. The closing price of Telefonija shares on Tuesday was RSD 85, meaning that the company's market cap amounts to somewhat less than RSD 50 million.