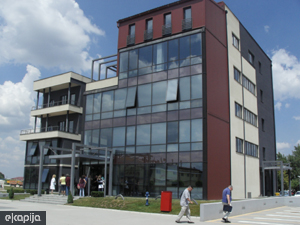 Sabac-based Inter-kop should soon commence work on the construction of a EUR 7 million metro station in Kazakhstan, the company announced Wednesday.

Inter-kop is one of the leading construction companies in Serbia, so it is not surprising that the contracts concluded with the state account for 95 percent of the company's overall engagement, it was said to Tanjug news agency during the Days of Open Doors, which the company organized for the press.

Construction of the Main Postal Center in Zemun and apartments in Belgrade's new neighborhood Stepa Stepanovic are only some of the big projects that Inter-kop was engaged in during this and last year.

Among Inter-kop's ongoing or completed projects are the following: the bypass around Belgrade, the Dobanovci interchange, social housing construction in Kamendin in Zemun, Dr Ivan Ribar neighborhood in New Belgrade, construction of an overpass on a section of Evropa Boulevard in Novi Sad, completion of works on the Zrenjanin interchange, completion of 12 kilometers of roads on the territory of Belgrade's boroughs of Cukarica, Rakovica and Barajevo, reconstruction of the Obrenovac-Sabac road...

Thanks to a strategic cooperation between Inter-kop and Italy's Margaritelli, the factory for producing railway ties in Kosjeric is expected to be completed very soon.

The factory's capacity in the first phase of production will amount to 150,000 ties a year, and it will employ 60 workers.