Martin Hintegger, Head of Corporate Finance at Erste Group Bank - There is no use starting IPO story if domestic investors are underdeveloped

How to find capital for the company`s further development is one of the everyday issues all businessmen think about. When a bank loan is not a solution, one may consider going public through an Initial Public Offering - IPO. Although the Serbian capital market has no such example to date, a good news is that at least there are no legal obstacles to IPOs any more. Everything is ready. Certain companies (such as Victoria Group and MK Group) can now continue what they started before the crisis year of 2009, when they announced that they would go public on the London or the Warsaw Stock Exchange.

Although it sounds encouraging and even too easy to be true, the IPO process is quite complex and requires a lot of preparations - by both the management and the public, as well as a good investment climate.

In an exclusive interview with eKapija, Martin Hintegger, head of Corporate Finance at Erste Group Bank, the financial group that has already participated in tens of such projects, speaks about how profitable all that is, the minimum profit a company needs to turn in order to be able to consider going public on the stock exchange in Belgrade or elsewhere in the region and how the failure of Facebook`s IPO affected global investors.

eKapija: Companies often complain that the IPO process alone is very expensive, while on the other hand, its success is uncertain. What are the expenses a company should count on and is that fear justified?

- There is no doubt that an IPO has a certain price tag. However, banks charge their fee only if the IPO is successful. Roughly speaking, bank fees range between 2 and 5 percent, depending on the size of the transaction. The smaller the deal, the bigger the fee. For large transactions (those worth about EUR 1 billion, for example), the fee amounts to 2 percent. The fee for Facebook`s IPO was even smaller - about 1.6 percent. However, for smaller deals, that fee can go up to 5 percent.

On the other hand, lawyers, auditors and others must be paid in advance, meaning that between 3,000 and 5,000 euros must be set aside for their services if the company decides to place its shares internationally.

eKapija: It is clear that there is no price list for IPOs, but for the sake of comparison, if my company earns EUR 5 million a year, can I even think about an IPO?

- It depends on the future that company wants to have. An important role is here played by EBITDA. If your EBITDA is EUR 5 million and multipliers are 6-7, the value of the capital will amount to 30-35 million euros.

eKapija: At the conference BELEX IPO 2012, which was organized by the Belgrade Stock Exchange, you mentioned the limit of EUR 30 million as the figure that applies to IPOs on regional capital markets. What is the minimum figure when we talk about going public on a local stock exchange?

- On the local level, conditionally speaking, capital limits are much lower. The smallest IPO that I`ve taken part in had the volume of EUR 16 million. We also worked on deals worth 12-13 million euros in Poland, but the local market there is both stronger and more developed. When it comes to going public on the domestic stock exchange, you must have a developed brand that is attractive to local investors. If there are no domestic investors in the market, there is no use starting that story.

eKapija: You also stated your opinion that it was not the right time for listing and going IPO exclusively on the Belgrade Stock Exchange?

- Actually, I am not sure about that. I must admit that I do not know enough about the Belgrade Stock Exchange and the readiness of domestic investors to invest their money at this moment. When a chance arises, and several companies have already expressed their interest, we will research that. Of course, there have been no IPOs in Serbia so far, which makes it difficult to talk about that.

eKapija: What are the most interesting industrial branches to investors?

- That literally changes every week. Until six months ago, public utility services (gas, water...) had been the most interesting. They used to produce high dividends, giving a 5.6 percent yield, much higher than the one given by T-bills. Today, investors are more interested in technological companies, such as Facebook, for example. However, two weeks ago, that example got investors to think about investments in high-tech businesses as too risky.

The interest of investors is changing constantly, but I must underline that there are investors for each branch. There are those investing in raw material funds, funds investing in shares in technological companies. Some seek dividends, others seek profit... 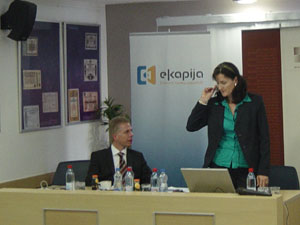 eKapija: You`ve mentioned Facebook. How much has the failure of that company on the New York Stock Exchange affected the decision of other companies to go public through an Initial Public Offering?

- We`ve already seen several deals in the technological sector canceled because companies believe that it is now too risky to proceed with the IPO process.

eKapija: Have you seen that in the region of central and east Europe?

eKapija: In which phase of the process can a company take a breath and say "we are now sure that our IPO will be successful?"

- Not until the end. Until the last moment, there is always a possibility of a failure.