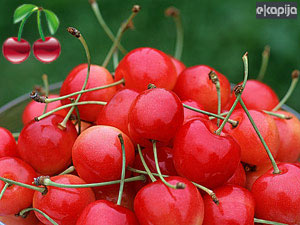 Aside from being known for its fairs, skilled traders and the name Civijasi for its citizens, Sabac may soon become famous for cherries as well. The city intends to beat even the village of Ritopek at cherry production, although this village is said to be the place where the world's sweetest cherries grow.

Cherry plantations will span over 300 hectares of fertile fields in Macva and Pocerina, and the Agriculture Directorate of Sabac last year started to grant subsidies for raising orchards.

Predrag Srdanovic, the director of the Agriculture Directorate of Sabac, says to eKapija that there will not be enough cherries in Europe over the next 20 to 30 years, adding that the soil in the vicinity of Sabac is ideal for growing this fruit.

- We already have about 100 hectares planted with cherries, new competitions are underway and the interest is huge. Farmers will pay for the seedlings in first fruits, which are expected in five years. For now, there are following varieties of cherry: burlat, kordia and regina.

The city administration did not stop at raising orchards, but took a step further and represented the Preliminary Design of the Center for Receiving, Processing, Packing, Storing and Distributing Fresh Fruits.

This 6,000-square-meter facility will be built on a land lot spanning four hectares. A team of designers, which consists of architects, technologists, mechanical and agricultural engineers, has offered an economic analysis, by which the required investment is set at EUR 4 million. At this facility, fruits will be treated to retain freshness for three to four weeks after the harvest and then to be sent to choosy western and eastern markets.

- The facility will be first used to process cherries and then to process strawberries as well. We plan to offer 250g and 500g packs to the market. Construction of a cold storage plant with accompanying facilities will kick off next year, and we hope to receive the first fruits as early as 2014 - says Srdanovic.

Srdanovic stresses that only the product sorted and packed in line with the highest European standards can achieve a good price.

Funds for the construction of aforementioned center and the building land have been provided by the city of Sabac, which will also run the facility, and the idea is to later engage the members of agriculture associations.

As the city officials say, this development project will turn profit as early as in the third year of implementation. Gross revenues should range between 10 and 12 million euros per year. The center would employ 80 workers, while additional 40 people would be hired as seasonal workers. Besides, minimum 5,000 collaborators should be engaged in the project.