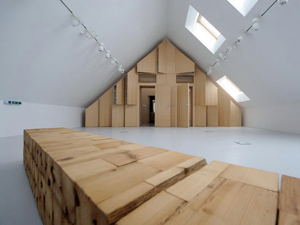 On the ruins of a dilapidated and long-deserted house in Mokrin, near Kikinda, the construction of a complex dubbed House on the Flat Hill has started. After running a successful business abroad for many years, Branimir Brkljac, an investor from Kikinda, has decided to use his knowledge and experience and help young, talented and creative people to become known. Thanks to the investor’s enthusiasm and idea, Terra Panonica has been operating successfully as a tourist and cultural complex for three years now, although the final phase of this project is expected to begin in 2015.

The idea of the investor was to create an estate that would be open to most various cultural projects. The concept of the estate is to interpret a village yard and ambient in a contemporary way, in order to give a new meaning to the term village estate. That is achieved by building facilities with various urban characteristics on a village estate, which is unprecedented and represents a novelty in our region.

Apart from a more significant inclusion of the local community through decentralization of cultural events, the aim of this project is also to improve the usual approach to the development of culture. Its program is flexible, thus allowing for the implementation of all kinds of creative projects. Creative individuals or groups would be enabled to leave their studio for a certain period of time to work and create in a different setting.

With respect to the initial idea – that the estate in Mokrin is intended for young people and those feeling young, an architectural design competition was announced, and the first prize was attained by a group of final-year architecture students from Belgrade. House B, the first facility built on the estate out of the total of five buildings to be built until 2014, earned them numerous awards and acknowledgements, confirming that the investor’s ideas and the ideas of this group of students are the winning combination.

The project House on the Flat Hill in Mokrin won the award of the Museum of Applied Arts in Belgrade for the best work of architecture in 2011, and the Ljubljana Hisa magazine ranked it among 46 best designed houses from all around the world. Terra Panonica’s House B has also been presented in prestigious magazines published in USA and the Netherlands, as well as at an exhibition in Vienna, at which a number of young Serbian architects were promoted.

Once the complex is completely finished, Terra Panonica will comprise an exhibition space, workshops, open-air movie theaters, accommodation for guests, restaurants, a space for presentation of authentic products, etc.

House B, as part of this complex, represents a space intended for creative work of any kind. This contemporary architecture both opposes the context and relies on it by preserving the relation towards heritage through the unchanged geometry of the facility. The street façade represents a replica of the old facade. From the yard side, the facade, with a large number of openings, is opening up towards the estate. Windows are constituent parts of the atmosphere of the interior, each reflecting a certain experience of the estate. Sliding shutters are located on the yard side. When closed, they nullify the openings, returning the full facade plane, and thus emphasize the form of the house itself. The radiant and flexible interior, with light whitish partitions, suggests an emancipated environment oriented towards communication and openness.

Once completely finished, the complex Terra Panonica will comprise an adapted old house with suites for guests (net surface - 568 sqm), a swimming pool and a wellness center (304 sqm), a showroom (40 sqm), a summer café and common areas for guests (70 sqm). There will also be a facility that was built the first, comprising the offices of the company Terra Panonica, a creative workshop and suites for workshop attendees (230 sqm)

The project demonstrates innovation and originality through implementation of a good idea and business model, as well as through an innovative approach to designing, construction and use of building materials, with the aim of making the estate energy efficient.

By merging rural and modern ways of living, the tourist and cultural complex in Mokrin offers contemporary people a simple (uncomplicated) form of enjoyment, while not depriving them of high technology. Creative people are enabled to express themselves, whereas businessmen are enabled to create new business ideas while resting from noise and urban chaos. The estate is not near important routes, but it is only an hour and half of driving away from Belgrade, 40 minutes away from the airport in Timisoara-Romania, and an hour and twenty minutes away from Szeged in Hungary. The road to the estate is regional, so that visitors do not feel as if they were in a deserted place, while rural idyll provides them with a perfect setting for an undisturbed work.

These amenities will contribute to the development of elite tourism.

Besides, the primary idea is to organize various activities on the estate during the whole year and, if needed, to enable the transformation of the entire complex from a completely tranquil atmosphere, which is perfect for rest and relaxation, into a dynamic and vivid ambient defined by various cultural events.

The idea is to bring the world to Mokrin for young, creative people who have not had a chance to go and see the world.

Use of innovative materials in the construction of the facility

Among the innovative materials used in the construction of this facility are Swisspearl composite cement panels, which are used to cover the entire façade and roof. This is the only facility in the region to have these panels on all five sides (including the roof). Aside from the esthetic value of these panels, which are available in a broad range of colors, and the possibility of cutting them to make various shapes, the aspect of energy efficiency achieved by the use of these panels is also very significant.

From the viewpoint of construction physics, the specially designed vented façade system Swisspearl is the most reliable. Inner layers provide the building with heat and sound insulation, while the outer layer efficiently protects inner layers from wind, rain, snow and sun. It is possible to shape the outer layer to reduce the influence of sun. The use of these panels and a carefully designed and installed vented façade system significantly cut heating and air conditioning costs, so that the investment quickly pays off, while preserving energy resources.

The idea is to engage young creative people, as the main driving force of the project, and give them a chance after graduation to use their talent and knowledge and put them into practice. At the architectural competition for a preliminary design of the estate Terra Panonica in Mokrin, the first prize was attained by a group of young architects from Belgrade, who named themselves Studio AUTORI. House B, the first facility built on the estate out of the total of five buildings to be built until 2014, earned them numerous awards and acknowledgements, which will also open many doors to them in the future. These awards also confirm that Terra Panonica is a multifunctional and extremely useful space.

House B is an operational building, the headquarters of Terra Panonica, which can be easily transformed into an exhibition space, a place to give lectures, organize workshops, cocktails and business meetings. Everything mentioned above is confirmed by the fact that numerous exhibitions, cocktails and workshops have already been organized in this space. Terra Panonica has definitely confirmed that altruism is compatible with a commercial success. When something is truly good, it does not require the engagement of the investor to draw the attention to itself.

Another extremely important factor that confirms the project’s social utility is its support to rural areas. Villages, which are slowly dying out because young people are moving out to urban areas, will get a chance for a new beginning through this project. Although the primary motive for building the House on the Flat Hill was not a profit, but an investment in youth energy and the employment of the local community, Terra Panonica has definitely confirmed that altruism is compatible with a commercial success.

Terra Panonica plans the estate to be self-sustainable once finished (in 2015).

The project has already achieved an incredible marketing success despite the fact that it is still under construction and that it has not got its final look yet, which is expected to happen in 2014. The interest expressed by the media and future users, both domestic and foreign ones, has surprised even the investors. House B, the facility that has won numerous awards, served as a showroom for visitors of various profiles during the first six months upon its opening. Support received from the local community is another positive sign that Terra Panonica is something good. Mokrin has got a new symbol – a Cyber house, as laymen call it.

House B comprises two suites, while the new facility will include another 6 suites for elite guests. Terra Panonica plans to cover several fields – cultural events, trade and elite tourism.

Cultural events should be financed from the revenue generated from elite tourism and trade.

Trade is focused on the selection of local products, which will be branded and marketed. The offer will include brandies, the Mokrin cheese, goat soap, tea…

Mokrin has a lot to offer, and European tourists are always in search for new destinations. Terra Panonica will satisfy the needs of even the most demanding tourists.

OTHER INTERESTING INFORMATION ABOUT THE PROJECT

History of the estate

One of the first eminent members of the Novakov family was Maksa. Maksimilijan Maksa Novakov (1796-1874) is said to have made his fortune by digging up a sack of gold in 1848. Others say he was a gold smuggler. Maksa’s grandson Ljupko Novakov built a true family estate in 1925, a very modern building at that time. This house, known as the "iron house" because of its metal gate and snow shield, was the first private residence with electrical installations.

Between world wars, Ljupko, and especially his son and heir Milan, hosted many distinguished politicians and members of the Government of the Kingdom of Yugoslavia who came to Mokrin to hunt. Among those who were regular guests at the Novakov estate were former Prime Minister Milan Stojadinovic and Minister of Defense Hadzic.

A jury consisting of architect Branislav Mitrovic, professor Aleksandar Kadijevic, architect Slobodan Maldini, architect Borislav Petrovic and Manojlo Vukotic, editor of the daily newspaper Novosti – selected House B – Terra Panonica as one of the top ten projects in the previous year from among 128 entries. The project was presented at an exhibition in Ozon gallery, Belgrade, in April 2011.

May 2011 – The Slovenian architecture and design magazine Hise included House B on the estate Terra Panonica in the list of 46 best projects in previous three years. Aside from being presented in a special issue of Hise, House B was also presented at the exhibition HISE Awards in Ljubljana, which was held as part of the international conference Big Architecture 2011.

May 2011 – At NOVE PRAKSE (NEW PRACTICES) exhibition, held as part of the Belgrade International Week of Architecture, Studio AUTORI, one of the top 8 young architectural studios, presented its project on the estate Terra Panonica.

July 2011 – At an exhibition dedicated to the architecture of Belgrade and young Serbian architects, held in the premises of Vienna Insurance Group in Vienna, Studio AUTORI presented its house project in Mokrin.

If the Youth Cultural Center Terra Panonica is your favorite for the innovative investment of the year, you can cast your vote on the official website of the 2012 Aurea Award.