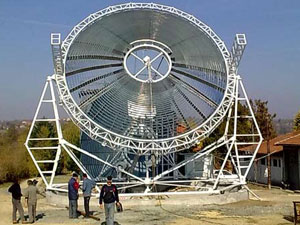 The first pilot solar power plant in Serbia has been built in Badnjevac, in the vicinity of Kragujevac. Equipped with a solar concentrator that is 13 meters in diameter, this heating plant is ready to be put in operation, it was announced on the website of the Serbian Chamber of Commerce.

This solution is a great breakthrough in the fields of energy efficiency and successful use of renewable energy sources. Solar systems satisfy a third of daily needs for energy because the sun shines an average of eight hours a day. In order to compensate for the 16-hour gap, many companies have also installed gas plants in addition to solar ones. There are also some solar power plants equipped with batteries that accumulate heat, but such heat batteries can help generate energy for only three hours after the sunset.

The high-temperature battery, which is patented by Dr Vladan Petrovic, makes it possible to use the accumulated solar energy whenever needed and continuously, 24 hours a day, 365 days a year. The battery's capacity is 450 kWh/m3, which makes it one of the kind in the world.

Professor Petrovic has also patented the battery core insulation system, which reduces heat losses to less than 6 percent a year. It can be applied to the production of electric energy and the supply of heating energy to cities and smaller places.

The advantages of this system lie in the continuous production of electric energy from the accumulated solar energy, and the battery's capacity is four to five times bigger than the one of the existing systems.

At a presentation recently held in Badnjevac, the interest in the first pilot project has been expressed by associates and experts of the Serbian Chamber of Commerce, as well as by representatives of Velika Plana, who want to have a concentrator 55 meters in diameter built, so the whole town could be supplied with electric energy.