From January to November 2011 Serbia attracted EUR 1.5 billion in net investments, that is, about EUR 1.8 billion in gross investments, which is more than any of its competitors attracted in the same period, Deputy Director of the Investment and Export Promotion Agency (SIEPA) Bojan Jankovic said at the 93rd meeting of the Slovenian Business Club, which was held on February 9th at Belgrade-based Continental hotel.

As Jankovic stressed, these are excellent results when compared to 2010, when Serbia attracted EUR 900 million in foreign direct investments, meaning that the amount of FDI was doubled in 2011.

Citing the main reasons why 2011 was a better year for Serbia when it comes to foreign investments, Jankovic said that investors had reacted faster, projects had been defined better and companies had had no financial barriers.

- Investors recognized Serbia as a valid investment option, while companies had a realistic situation they wanted to resolve quickly.

Among the successful projects he mentioned are companies Muehlbauer, Yura, Sitel, Bosch.

Referring to an analysis of foreign direct investments in the last 10 years (2001-2010), which SIEPA based on over 300 investment projects and EUR 19.5 billion worth of investments, Jankovic pointed out that 4 countries - Germany, Italy, Austria and Slovenia - accounted for half of all investment projects implemented in that period, adding that they had contributed the most to Serbia's exports. 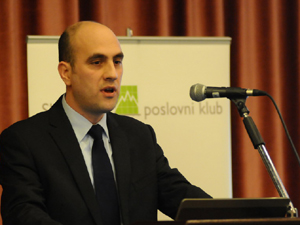 The 93rd meeting of the Slovenian Business Club was also attended by Slovenian Ambassador to Serbia Franc But, who said that Slovenia's investments in that period, ranging from acquisitions to brownfield and greenfield investments, had amounted to about EUR 1.6 billion.

- Serbia needs Slovenia's investments in 2012 as well, and the structure of FDI in Serbia largely depends on Slovenia's activities, which is already shown by the previous data about the number of investment projects - Jankovic stressed.

Aside from the fact that such a large number of industrially relevant investments contributed to the creation of new jobs and positioned Serbia as an area with a favorable foreign investment climate, a solid number of foreign investments, together with the treasury bill sales, also contributed to the stability of Dinar exchange rate in 2011, said Milun Trivunac, adviser to the Minister of Economy and Regional Development of Serbia.

In addition to representatives of the Ministry of Economy of Serbia and SIEPA and the Slovenian ambassador, the 93rd meeting of the Slovenian Business Club was also attended by a large number of members of the Club, and it was also an occasion for the presentation of the Slovenian company SAOP, which opened a branch office in Novi Sad in early 2011.

SAOP is engaged in the development and implementation of its own equipment, business software solutions and services for accounting agencies, companies and public institutions. This company develops two types of solutions: iCenter, an ERP software for trading, production, interest rate calculation and companies with demanding operations, and miniMAX, the simplest bookkeeping software for e-operations by companies or accounting agencies. These two programs are today used by over 3,700 clients and hundreds of medium-sized and large enterprises and institutions, as well as by over 14,000 users.

The company SAOP will celebrate its 25th birthday this year. SAOP currently has 3 employees at their office in Novi Sad and plans to hire one more person soon, which proves that the company is interested in developing its operations in Serbia, SAOP Marketing Director Sandi Borso pointed out.