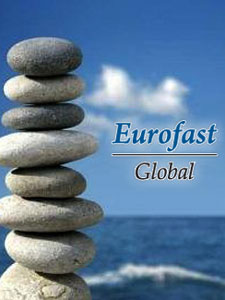 Eurofast Global took part at the two day event GO INTERNATIONAL, held October 24 and 25, 2011, at the Hyatt Regency Hotel in Belgrade and organized by Eurobank EFG in cooperation with a number of Greek business associations (PSE, SEVE, EAC), under the auspices of the Hellenic Ministry of Foreign Affairs and supported by the Serbian Chamber of Commerce and the Business Council Greece - Serbia.

The event was titled “Greek-Serbian Bilateral Trade & Regional Synergies” and had the objective to promote and facilitate business contacts and cooperation between Greek and Cypriot companies and their counterparts from Serbia, Bosnia, Montenegro, Slovenia, Croatia, Hungary and Russia for the further development of the trade potential in the region. The event gathered numerous businessmen from South East Europe.

The concept of the event was focused on B2B meetings, where the companies’ representatives had the opportunity to meet and explore potentials of eventual mutual cooperation, showing clear interest from both sides to enhance the business cooperation between two countries.

Eurofast's professional services include accounting and payroll services, transaction advisory, compliance reporting and cross border structuring. The Belgrade office of Eurofast Global is operating since 2007, headed by the director of Western Balkans, Mr. Slobodan Mihajlović who is also a tax expert, and its team is consisted from tax professionals, lawyers, accountants and administration staff.