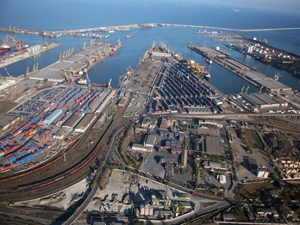 This year, Constantza Port Day was held for the first time in Novi Sad. The Master Congress Center hosted the event attended by over 180 representatives of Serbian companies and institutions, but also from Bosnia, Croatia, Austria, Hungary, Netherlands and Switzerland. On this occasion, the Romanian businessmen came at Novi Sad to meet partners from Serbia and neighboring countries.

The event, organized by the National Company Maritime Ports Administration SA Constantza, has become traditional in the region, reaching this year its fifth edition.

Ports of Novi Sad, Pancevo and Belgrade from Serbia, Port of Brcko from Bosnia, ports of Vukovar and Osijek from Croatia, Port of Baja from Hungary were represented at high level.

’’I am very glad that the Danube has brought us here, in Novi Sad, together, to get to know each other and to identify our mutual interests," said Aurelian Andrei Popa, in the opening of the event.

The Chargé d’Affairs of the Romanian Embassy in Belgrade, Lonel Constantin, emphasized that Serbia was an important and a traditional partner of our country, adding that the interests of the Romanian companies to expand their business in the Serbian cities were growing. 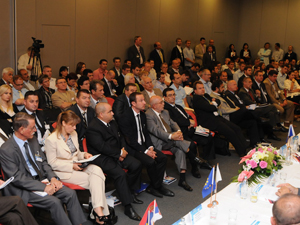 The Romanian diplomat said that Port of Constantza’s event offers the opportunity to discover new areas and ways to expand the economic relationships between the two countries.

The presentation held by General Manager Aurelian Andrei Popa was the focal point of the event.

The Port of Constantza has demonstrated its competitive advantages resulted from the connection with the Danube, offering a shorter, cleaner, cheaper transport alternative and also a considerable time saving for the transit of commodities from the Far East having as destination the Central and Eastern European countries.

The traffic of goods between Romania and Serbia through the Port of Constantza registered significant increases within the last 5 years, with the number of companies from Serbia being present in the port of Constantza increasing as well. In 2009, the traffic of goods on the Danube, between Constantza and the ports in Serbia, amounted to 1,621,612 tonnes, and it reached 2,125,958 tonnes at the end of 2010, rising by 31.3%.

In the first eight months of this year, the traffic of goods between the two destinations amounted to 1,430,013 tonnes. In the latest years, the traffic of grains is on an upward trend, but there is also a potential for the development of ores segment or oil products.

"The trend of increasing the traffic of goods between Romania and Serbia through the Port of Constantza, as evidenced by the records, is kept for the future, too. A contribution to this will be given by the Danube Strategy, through which the European Commission encourages the development of navigation on the Danube by turning a good part of this important transport route for the South-Eastern Europe into navigable waterways," said Aurelian Andrei Popa.

The major infrastructure projects that are currently under development in the Port of Constantza and the efforts of the NC Maritime Ports Administration SA Constantza to attract private investments are increasing the chances to keep the Port of Constantza among the top competitive ports in this area and turn it into the most important distribution center for the Central and Eastern European area.

Sinisa Bubnjevic, member of the Novi Sad Local Council, emphasized that the presence of Constantza Port in Novi Sad was understandably normal taking into consideration that many partners of the port were from the same area and that the potential for developing new business relations between the two parties was highly promising. It should be mentioned that the biggest partners of the Port of Constantza from Novi Sad are MK Commerce and Victoria Group and the largest amounts of cargo from Serbia are coming to Constantza from the ports of Novi Sad, Pancevo and Backa Palanka. 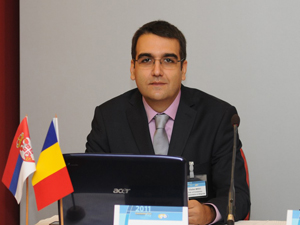 Milenko Milivojevic, General Manager of the Port of Novi Sad, welcomed the initiative of Constantza Port to organize this event in Novi Sad. ’’Such meetings between port authorities and business partners should be necessary in every port on the Danube," considers Milenko Milivojevic.

The representatives of the ports of Novi Sad, Pancevo and Brcko presented their facilities and development plans, the ’’common denominator’’ being the improvement of the operation conditions and increase in the traffic of goods on the Danube as well as the Sava river.

Recently, the navigation conditions on the Sava river have been improved, the focus being on signaling and assuring the necessary drafts, thus allowing easy transportation of goods to/from the North of Bosnia.

’’I am convinced that this event is a very important support for our partners in Serbia, making it possible for them to get familiar with the potential of the Port of Constantza and increase their turnover using the port’s advantages," said the general director of NC MPA SA.

"Our strategy is based on the continuous development of the investments in the Port of Constantza, aimed at improving the port's performances, so we could meet, in a favorable way, the needs of our partners with whom we cooperate permanently in order to enjoy a mutually beneficial partnership," said Aurelian Andrei Popa.

During the event, many business contacts were made, with the meetings between representatives of companies attending the event being just a first step towards the conclusion of profitable deals.