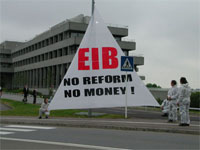 Thanks to these means, Banca Intesa will be approving long-term investment credits to small and mid-sized enterprises and local self-managements in Serbia, but certain part of them will be intended for financing of health care, education, sport and leasing.

So far, EIB have already approved 125 million EUR worth of 7 loans to Serbian commercial banks, thanks to which 1,000 people in Serbia got jobs.